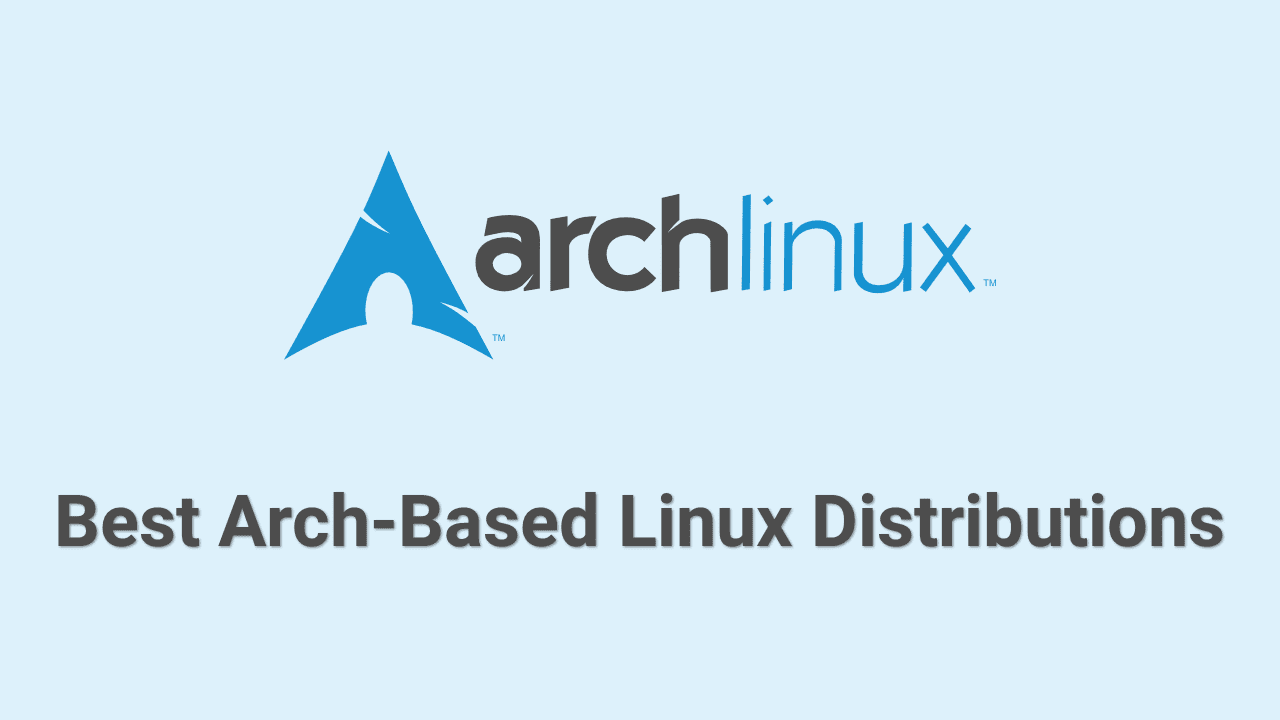 Arch Linux’s flexibility and customization options make it a primary choice of an operating system for Linux users. Arch adheres to a rolling release model, which means you can install it once and keep updating it till eternity.

The performance-boosting features of Arch make it an absolute delight for the end-users. For all its advantages, Arch Linux remains one of the most cumbersome distros to configure and install. In fact, even though the installation process is one of the best documented ones.

However, Arch Linux is also aimed at more experienced users. As such, it is generally considered to be beyond the reach of those who lack the technical expertise required to use it. In fact, the very first steps, installing Arch Linux itself is enough to scare many people off.

If you are fighting with Arch’s compound installation method, you can always delve deeper into how Arch-based distros work and then take it on from there. Here are the 14 Best Arch-Based Linux Distributions for Arch lovers who want to make the most out of this flexible operating system.

Like some of the other distros on the list, Anarchy Linux is also an open-source distro, which draws its inspirations from Arch Linux.

Anarchy Linux intends to pave the way for desktop computing and further provide you a platform to install a customized Arch-based OS.

You have an option to either write the distro’s ISO image to a USB/CD or install it directly on a virtual machine. With Anarchy Linux, you get access to a full live system, which allows you to try the distro before installing it on your system directly.

The live system comes equipped with an XFCE desktop interface and a fully established software suite. Enjoy the comfort of accessing an Arch-based Linux distro in a series of languages, so that there is a little bit of something in every bit you install on your system.

If installing Arch Linux seems like an unfathomable task, then you might want to reconsider your decision concerning Manjaro.

As Manjaro uses Calamares in a customized format, users find the operating system simple to set up. The OS is available in three versions, each with a different desktop environment: KDE Plasma, GNOME, and XFCE.

However, the list of editions doesn’t end here. The community has also released other versions ranging from the i3 window manager and bspwn to Budgie, awesome, and many others.

ArchBang is a minimalized, general-purpose live Linux distribution based on Arch Linux.

It is a rolling release under the GNU General Public License, ships with Pacman as the default package manager, and OpenBox as the window manager. ArchBang has been around for a while now and is still in active development where it is built to run Standard Systemd with speed and stability especially even on low-end hardware.

ArchLabs is a distribution based on Arch Linux and featuring the Openbox window manager as the primary desktop interface. It is influenced and inspired by the look and feel of BunsenLabs with the intermediate to advanced user in mind.

ArchLabs is a 64-bit, rolling release distribution which provides a live DVD. The distribution can be installed using the AL-Installer system installer.

Let’s say, BlackArch is the Arch equivalent of the Debian-based Kali Linux.

This system is widely used by people who intend to use their machines for security researches and hacks. This Linux distro offers more than 200 security and pen-testing tools, which are a must-have for every hacker’s toolkit. In BlackArch, you receive support from the AUR package repository, while the features of pacman, the default package manager on Arch-based distros, attract users to this system.

Users can install various tools in groups, which helps save a lot of time.

You, as a user, can choose between installing BlackArch using the complete ISO or netinstall ISO, each of which is available in small-size images.

Unlike other Arch-based projects, ArcoLinux is pitched as a learning platform that hopes to transform new users into Arch masters.

To that end the project produces not one but several distros. The ArcoLinux learning process has been broken into six phases, and the various ArcoLinux distributions are part of those phrases.

The project hosts a string of such customised ISOs as contributed by its community. The main ArcoLinux release comes with three desktop environments, is chock full of productivity apps and is designed for the average desktop user.

This is the release that’s designed to be used as a regular desktop.

Virtually all aspects of this distro have been tweaked and the customized desktop looks inviting, with its attractive icon theme and the Plank dock.

Bluestar Linux is an independent Arch Linux-based distribution that focused on creating a tightly integrated rolling and transparent distro for modern desktops.

It follows innovations and ships the latest updates for the Plasma Desktop. Bluestar is a fully configurable distribution that can be permanently installed on a laptop or desktop system.

OR you can run it effectively using a live installer and supports the inclusion of persistent storage for those who are not installing it permanently. A Bluestar Linux software repository is in continuous development and offers additional tools and applications when required or requested.

RebornOS developers’ goal is to bring the true power of Linux to everyone, with one ISO for 15 desktop environments and full of unlimited opportunities for customization. RebornOS also claims to have support for Anbox for running Android applications on desktop Linux.

It also offers a simple kernel manager GUI tool. Coupled with Pacman, the AUR, and a customized version of Cnchi graphical installer, Arch Linux is finally available for even the least inexperienced users.

On DistroWatch, EndeavourOS ranks number five, given its popularity among Arch enthusiasts.

The system is famous for its fast and stable configuration, as it offers minimalism and customizability on a platter.

As a user, you should choose this platform for its simple design, playful icons, and cheerful elements.

The customer service team and developers of the OS are always available in case of any query.

One of the few distros that are endorsed by the GNU/Linux project, Parabola GNU/Linux-libre goes to great lengths to ensure it only includes free as-in-freedom components. That covers everything from the kernel and the hardware drivers to libraries and applications. Instead of the standard Linux kernel, Parabola uses the version from the GNU Linux-libre project that’s been stripped of all proprietary and non-free firmware blobs and code.

Thanks to this philosophy it won’t support many wireless cards and top of the line graphics hardware. This respect for freedom is also applied to the official Arch repositories from which the distro sources its packages.

In fact the project maintains a list of packages in the Arch repos that don’t adhere to the free software specifications, which currently lists over 800 packages. Unlike some of the other projects in this list, Parabola puts out several releases. The distro is one of the few distros that continues to support the 32-bit architecture.

It is also one of the few that supports multiple init systems, systemd and OpenRC. There are also editions that boot to a command-line environment and others that boot into an LXDE desktop. The good thing however is that you can use any of the ISOs to install any variant of Parabola.

For instance, you can use the CLI OpenRC Live CD to install a system with the Gnome desktop that uses systemd.

Garuda Linux is fairly new to the Linux world and is aiming to provide the greatest performance, offering all the modern and attractive features.

Even though you can choose various desktop environments, it is clear that their flagship desktop is a heavily customized KDE Plasma with a dark, neon look. Cyberpunk, anyone?

Its Ultimate edition is optimized for gaming, and the recently introduced Dragonized (Dr460nized) version is aesthetically “lavish”. Arch Linux installation can be a milestone for many Linux users, let alone to optimize your system at the level that Garuda Linux offers behind the convenience of Calamares installer.

As I like a more traditional desktop, I started to test the MATE version of Garuda Linux, but I ended up taking the screenshots to the beautiful Dragonized edition. Though I encourage everyone to install Arch Linux the “traditional” way as part of their learning process, I can understand that this task is time-consuming and intimidating to some users.

Like the most popular Arch-based distribution Manjaro, Garuda Linux is up and running within a few clicks, thanks to Calamares installer.

A community-developed GNU/Linux distribution with an emphasis on KDE and Qt technologies.

Chakra Linux does not schedule releases for specific dates but uses a “Half-Rolling release” system. This means that the core packages of Chakra Linux are frozen and only updated to fix any security problems.

These packages are updated after the latest versions have been thoroughly tested before being moved to permanent repository (about every six months). In addition to the official repositories, users can install packages from the Chakra Community Repository (CCR), which provides user made PKGINFOs and PKGBUILD scripts for software which is not included in the official repositories and is inspired by the Arch User Repository.

Archman Linux is an Arch Linux-based rolling distribution built with a focus on power, speed, stability, and aesthetics.

It exists to always provide users with up-to-date packages as well as provide unlimited access to all the customization features Linux has to provide starting from the several desktop environment options to testing the latest releases and packages before committing to installing them.

The Arch User Repository (AUR) can also be used.

That’s pretty much it! So, there are Best Arch-Based Linux Distributions.

If you have any other favorite Best Arch-Based Linux Distributions then don’t forget to share them with us in the comment below. Also, if you liked this article, Share on your favorite Social media platform.