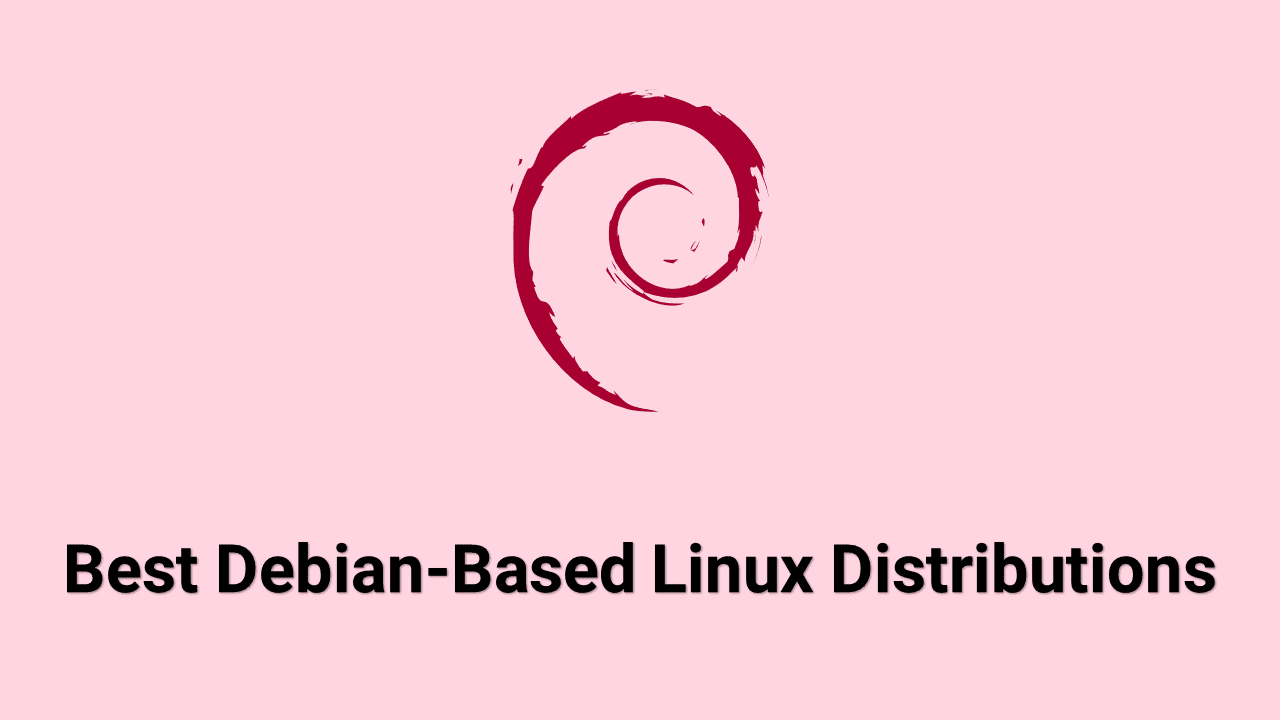 Millions of people use a version of Linux based on Debian because Debian Is Stable and Dependable, You Can Use Each Version for a Long Time, Ideal for Servers, Supports Many PC Architectures, Largest Community. But if you have more specialized needs, you might want a Debian alternative.

Love Debian Operating System but want an alternative better suitable to your needs? Here’s a list of the best Debian-based Linux distros for you to try.

When you think of a Debian-based desktop Linux distro, you probably think of Ubuntu.

Q4OS intends to be a leaner, meaner desktop, and a suitable alternative to Ubuntu. Where Ubuntu is based on Debian Unstable, Q4OS tracks the stable version.

The default desktop is KDE Plasma, but the developers give the option to switch desktops, including the Trinity desktop.

It’s even possible to run Plasma and Trinity side by side in Q4OS. Though it might seem oxymoronic to refer to KDE as a “minimalistic” desktop environment, this might say more about modern computers than it does about the desktop.

AntiX is a comparatively lightweight distro ideal of low spec or old PCs.

Whether you are a beginner in Linux or an experienced user, AntiX aims at providing a light, flexible, and fully functional OS. You can get started with an old PC with a 512 BM RAM and a minimum of 5GB hard disk space. Additionally, you can run it as a ‘Live’ system on a flash drive as a rescue CD.

If you ask which is the most beautiful Linux distro, you will get this answer in most cases.

Of course, you can customize any Debian based distribution that looks like your dream setup. But Elementary OS is very neat and clean out of the box without any customization.

This distro is completely open-source with the focus mostly on privacy. However, the download runs on a “pay as you want” method. However, you can pay nothing and get this completely free of cost.

Their highly curated software repository, named AppCenter, is a very convenient way to get useful tools from indie developers.

It seems that as Linux distributions come out, some people think they just have too much stuff in them and release “minimal” Linux distros.

SparkyLinux is yet another take on creating a “minimalist” desktop distro. Like Q4OS, SparkyLinux aims for a lightweight desktop experience through the LXQt environment by default, though images are also available with Xfce and KDE.

It’s based on Debian rather than Ubuntu. You can also install other custom variations: the gaming-focused GameOver, Multimedia for audio, video, and web development, and Rescue for fixing an unbootable system.

A MinimalCLI version is also available without an X server. SparkyLinux gives you the choice to install a “stable” version or the bleeding-edge “rolling” version, depending on whether you require stability or the latest software.

PureOS is a modern and fully-features distro that takes pride in being a privacy-respecting, secure, and user-friendly operating system.

By default, it ships with a GNOME environment with a FireFox based focussed on privacy known as PureBrowser.

The default search engine is DuckduckGo, and it allows users to take hold of their online privacy.

Pop OS is a revamped Ubuntu. Although it is technically a Debian based Linux distribution.

This is a relatively new distribution that started in 2017. System76 is the company behind this beautiful operating system.

System76 is a top-rated company for ready-built powerful computers. They started this OS so that they can install it by default in their machines.

Their popularity made them continue full-fledged development. Since the developer company works mainly in the hardware sector, they have put out of the box support for Nvidia and AMD graphics with this distro.

Devuan is a fork of Debian that resulted after the latter made the switch in its init system from the old Unix System V-inspired system to systemd.

A move that was controversial in the Linux community for various reasons ranging from alleged software bloat to developer behavior, the potential for a systemd monoculture, and the dominance of the project by Red Hat (where it originated).

A number of Debian developers left the project and started Devuan to promote what they call “init freedom,” releasing a variant of Debian that doesn’t use systemd.

By default, Devuan uses the sysvinit system, but you can choose among others.

Knoppix is a Debian variant primarily designed to be run from a Live CD or USB drive.

With your bootable medium, you can simply plug it in on any machine and conveniently run it. It comes with a default LXDE environment and like other distros, it comes with day-to-day use software applications such as the IceWeasel web browser, Icedove email client, Mplayer, and GIMP image editing tool just to highlight a few.

Knoppix is quite lightweight and is ideal for low spec and old machines. You can get off the ground with a 1GB RAM Intel or AMD system.

KDE is originally a development community that is behind many great Linux software.

Their KDE Plasma desktop environment is trendy among the Linux users. To make their software easily accessible to more people, they had decided to launch KDE Neon. However, this is not a full-fledged Linux distro.

However, the look and feel are similar to other Debian based distributions.

This is an Ubuntu with a Plasma desktop and some exclusive KDE software suite. I like KDE because of its smoothness. And the most important thing is it didn’t compromise the aesthetics of the user interface for the sake of performance.

Ubuntu is by some measures the most popular desktop Linux distribution, and for good reason.

It offers a friendly graphical user interface and has the widest driver support. A lot of Linux users, both newcomers and experts, love it because it just works.

Ubuntu is based on Debian Unstable, effectively taking a snapshot of it and polishing it for general use.

AV Linux is a Debian-based distro that targets multimedia content creators and is available for download in both 32-bit and 64-bit architectures.

IT ships with preinstalled audio and video editing software and is a suitable alternative to Ubuntu studio for content creators.

Kali Linux is known as Linux for hackers. This distro is a Swiss origin.

Just like the Swiss banks, this distro will provide you excellent security and flexibility to break into secured systems. Of course, you can install most hacking tools on any Linux distro.

However, Kali Linux comes built-in with the popular pen-testing and security software. The important aspect of Kali Linux is its portability. This runs greatly even on ARM devices like Raspberry Pi.

This is why Kali Linux is very popular among the tinkerers’ community. The official website has a complete directory of Kali security tools that you can install into any distro.

This is undoubtedly the best Debian based Linux distribution for security research.

Deepin describes itself as “the top Linux distribution from China,” aiming at a global audience. The distro has its own desktop, the Deepin Desktop Environment, along with a suite of its own applications, including a package installer. The interface is attractive, while the underlying system is based on Debian.

Linux Mint has for a long time been a favorite among many users – experts and beginners alike – thanks to its user-friendliness and neat and simple UI which make it easy to navigate around.

It shares the same package repositories with Ubuntu and the latest release – Linux Mint 20 Ulyana, is based off Ubuntu 20.04 ( Focal Fossa).

Mint 20 is available in MATE, Xfce and Cinnamon editions, which are by far lightweight compared to the heavy GNOME desktop environment that ships by default with Ubuntu 20.04. Like Ubuntu, you get the usual everyday-to-use applications such as Firefox browser, LibreOffice suite, multimedia apps, image editing tools and so much more.

Built on Ubuntu 20.04, Mint 20 is a fresh breath of air with its new features, and tons of enhancements and bug fixes. You get a refreshing wallpaper with multiple high-resolution and stunning wallpapers & background images to choose from. In addition, you can apply different themes and tweak most UI components such as applets, widgets, and icons to your preference.

Like Ubuntu 20.04, Mint 20 has introduced fractional scaling for high-resolution display monitors and users also get to leverage the flatpak utility for installing applications. My only gripe with Mint is its lack of support for a snap by default, which I honestly feel is a disappointment.

Nevertheless, you can still enable it by installing snapd and get along with installing your snaps. Overall, I find Mint 20 a rock-solid distro which is fast and stable with bolstered features that go a long way in improving performance and user experience.

If you are still holding on to an earlier version of Mint, upgrading to Mint 20 will definitely be a delight.

I will always recommend Zorin if any Windows user wants to try out Linux for the first time.

It’s because this distribution has a Windows-like user interface. Although the XFCE desktop environment will let you use desktop layout representing Mac and Ubuntu also.

This is a paid operating system. However, there is an education and lite version that is completely free with some limitations.

For example, you will get premium desktop layouts, premium games, and some essential utilities in the paid version that are not available in other editions.

But, for the 39 bucks, you are getting the one of the best Debian based Linux distributions for visual appearance.

MX Linux is a lightweight Linux distro that tries to be a middle ground between minimalist distros and large ones like Ubuntu. By default, it uses the Xfce desktop, with additional KDE Plasma and Fluxbox options. The distro is a successor to the original MEPIS distribution as well as antiX, the name is a combination of both project names.

Parrot OS is yet another security-oriented Debian variant that packs a collection of tools used for carrying out penetration tests, digital forensics, reverse engineering, and cryptography to mention just a few use cases.

It’s available in both MATE & KDE desktop editions as well as an ova file – virtual machine file. The current release is Parrot 4.10.

That’s pretty much it! So, there are Best Debian-Based Linux Distributions.

If you have any other favorite Best Debian-Based Linux Distributions then don’t forget to share them with us in the comment below. Also, if you liked this article, Share on your favorite Social media platform.