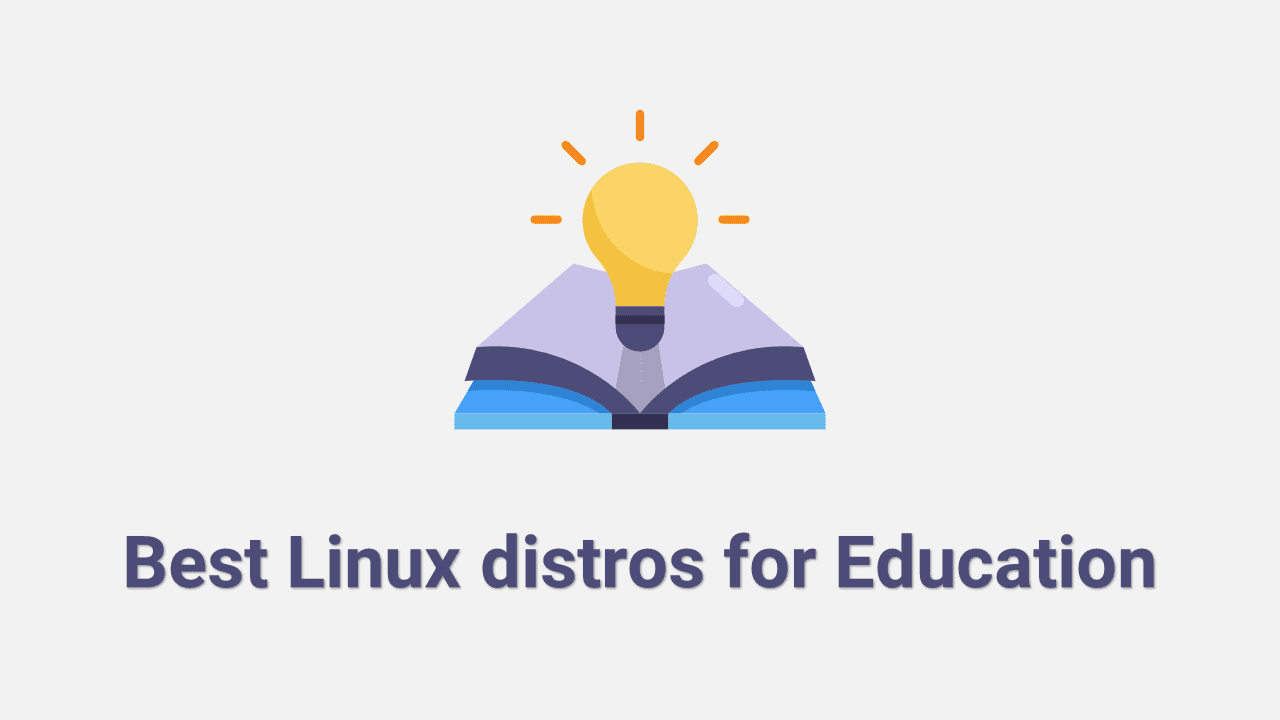 Linux has been the first choice for software developers and programmers around the globe. Given its level of complexity as an operating system, most professional developers prefer to use it for their daily tasks. Also Linux has a reputation of being a server operating system (OS) that’s mostly used by administrators.

The question is Can kids/students use Linux distributions for education purpose?

The answer is Yes.

No matter whether you want something for a kid or the school teacher, there are options available. The best Linux distros for Education make it simple and easy to use learning materials, in a way that’s affordable and accessible.

Today, there is a distrinution for everyone out there, whether you are a programmer, a home user, a kid/student, and a little bit of something for teachers and schools too.

In this guide we’ll look at some of the specially tuned distros that gather and roll learning software to help create the perfect educational environment for your kids.

UberMix is based on Ubuntu. The distro proudly claims that it is built by educators keeping the requirements of both students and teachers in mind.

The distro is available as installable USB images and as virtual appliances that you can safely test without installation inside VirtualBox.

One of the goals of UberMix is to make it simple to install and administer the distro.

To that end, the developers have swapped out Ubuntu’s installation with their own streamlined rapid installation mechanism that makes it fairly simple to roll out an UberMix machine.

The distro boots into a customized Gnome desktop and while its collection of apps doesn’t rival that of DebianEdu/Skolelinux, it does include several useful educational apps.

Furthermore, in addition to educational apps, UberMix also ships with several IDEs to help you code in your favorite environment.

True to its name, UberMix also includes all the usual desktop productivity apps to enable you to use the distro for regular desktop tasks as well.

DebianEdu is a modified release of the free, open-source Linux operating system known as Debian for educational purposes.

Like most EDU-centric Linux distributions, it comes with a whole host of useful apps to use in a school setting.

All of the software included is free and open, conforming to Debian’s ideological stance on open source software. In the overall Linux community, many people go with Debian because the OS is reliable, slow to change and rarely adds new features. DebianEdu follows this same trend.

If you need a good OS for a school setting that will never break, give DebianEdu a go!

Escuelas Linux is based on Bodhi Linux.

It comes baked in with several applications fit for educational environments. It has custom tools for resetting the distro in the post-installed state in seconds.

There is also options to reinstate users. Apart from that, it comes with applications for distributing educational material within the network, screen broadcasting, mirroring, remote command execution, message sending, screen locking and muting sound to the students’s computers.

Considering it is based on Bodhi Linux, which is one of the best lightweight Linux distros, this can be a good pick for older systems. You also get an added developer pack, which is optional to install, if you need advanced tools like NetBeans, Git, Android Studio.

If Uberstudent unable to satisfy your requirements, you should definitely check out openSUSE-Edu.

openSUSE is another very capable distro for the education niche. It can very much satisfy a school’s requirements from servers to desktops.

Even the live DVD contains KIWI-LTSP server which can be enabled quite easily for demonstration purposes.

It also comes with a lot of useful applications for students, teachers, IT administrators and even parents. openSUSE comes with different desktop environments including GNOME, GNOME Classic, KDE Plasma, and Mate.

One of the newest distros in this guide, AcademiX is also based on top of Debian Linux.

Unlike the other distros in this guide, AcademiX doesn’t ship with any educational apps, which might come as a surprise.

Unlike traditional package managers, EDU groups packages by ages and by subjects.

It lists four age groups for learners along with about a dozen subjects ranging from astronomy, biology, geography, foreign languages, to electronics, programming, genetics, robotics, and many others.

Besides these you can also use EDU to tap into Debian’s extensive repositories and flesh out the distribution for all kinds of desktop/system tasks.

Sugar is actually a learning environment built with Python that according to its developers is “based on the principles of cognitive and social constructivism.” The developers of Sugar believe children are not office workers, which is why they need a special interface that encourages learning.

This is why the Sugar interface is a departure from the traditional desktop metaphor and instead attempts to create a user interface that encourages learners to engage and learn by doing.

You wouldn’t find any of the usual learning apps in Sugar, but its activities will impart all kinds of skills for preschoolers such as reading, writing, counting, and more. You can install Sugar on top of your existing Linux installation, or use it through specially created distros called Sugar on a Stick (SOAS) meant to be installed on USB disks.

In addition to the official SOAS, the website also lists the Trisquel On A Sugar Toast (TOAST) distro, which has a lot more Activities and works better and on underpowered machines.

Linux for education (Li-f-e) was originally a project by OpenSUSE and this is a continuation of that. Even though it is not backed by OpenSUSE now (I couldn’t find any references), it could be a useful option for kids and schools.

This is based on Ubuntu MATE and offers several built-in applications as per some of the textbooks.

It does not offer anything extraordinary but more like Ubuntu for education, which is actively maintained at the time of writing this.

Endless OS, with its perfect design and simplistic features, caters to a child’s educational needs.

Its user-friendly interface and easy-to-use layout are some of the things which make this OS stand out. Endless OS derives its roots from Debian, and it uses the GNOME desktop environment.

The OS comes with a wide variety of pre-installed applications that allow the system to function without an active internet connection. It’s a little challenging to get hold of this OS, as it is available for only five hundred computers per year.

Having said this, if you do manage to download Endless OS, rest assured, it will offer a good learning experience for your child’s learning.

Kano OS is a tailor made distro that powers the Kano Computer Kit, which is built around the Raspberry Pi. Just like Sugar, Kano OS has also tried to reimagine the desktop interface for learners.

The distro by default boots into the Storyboard mode, though there’s a Classic mode as well, which brings up a more familiar interface.

The primary intent of the distro is to help students learn how to code.

But while it does include various apps for this purpose, there are a handful of other general purpose learning apps as well. Sadly the distro doesn’t run on the latest Raspberry Pi 4, and the developers seemed to have stopped working on the distro in favor of their new device built in collaboration with Microsoft.

Still the project seems to be a good option if you want to learn to code with a Raspberry Pi 3.

A Linux distribution with the perks of Ubuntu LTS built for school servers.

If you want to setup a server and monitor/control a network of connected servers, Linux Schools (or Karoshi Server) is a good fit. It lets you administer a network of servers using a web interface.

You do not need in-depth knowledge about Linux system administration to utilize it.

Uberstudent is another popular Linux distro that focuses on education and highly tailored for students in secondary and higher education.

Uberstudent is also built on top of Ubuntu (Uberstudent 4.3 is based on Ubuntu 14.04.2 LTS and the installation is as straightforward as installing Ubuntu.

The pre-installed software categorized quite impressively so you can easily find what you are looking for. Uberstudent comes with Zotero reference manager and thus for the researcher, this is just great.

Even though Edubuntu looks more polished with its Unity Desktop, Uberstudent with its Xfce desktop is also lighter on your system and works well with even older hardware.

The Fedora Education SIG (Edu SIG) seeks to optimize Fedora for use by teachers and students, both within and outside of the context of educational institutions.

The distro comes with a lot of educational applications including teacher tools such as Wink for screencasting and Hot Potatoes for lesson creation and many other web applications.

It also comes with a lot of applications that target specific age groups such as gcompris(age 2+), sugar(6+) and Celestia (14+).

FedoraEdu provides a functional distro that enables and promotes the use of open-source educational software.

That’s pretty much it! So, there are Best Linux distros for Education.

If you have any other favorite Best Linux distros for Education then don’t forget to share them with us in the comment below. Also, if you liked this article, Share on your favorite Social media platform.