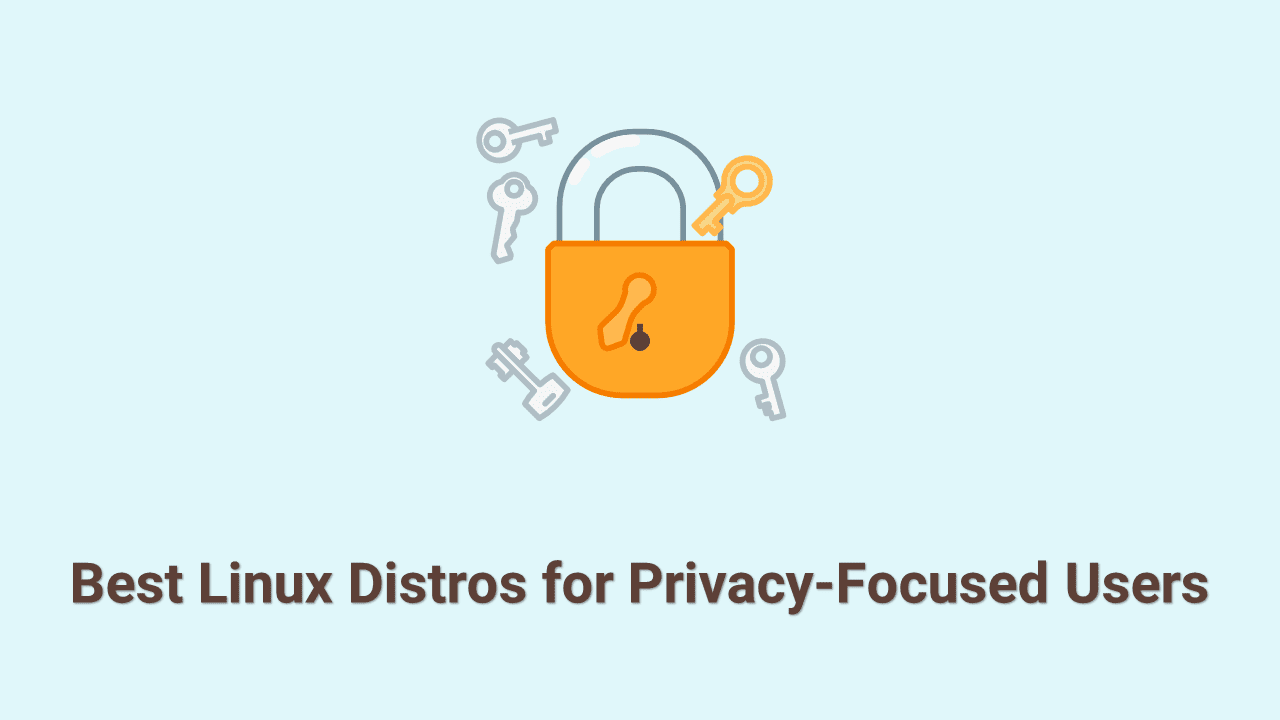 The Spread of cyberattacks and increasing security breaches is a matter of great concern in the open-source community. Linux distros are usually more secure than any other operating system. Linux Operating Systems being open-source leaves very less scope of unauthorized access to its core.

However, with the advancement of technologies, incidents of attacks are not rare. The best Linux distros for privacy and security make it simple and easy to better secure your computer against cybersecurity threats.

If privacy ranks high on your agenda then Here are the 15 Best Linux Distros for Privacy-Focused Users in 2022. The distros in this guide have all been constructed specifically to prepare you with the means to defend your privacy and ensure you stay secure while browsing the internet.

Kali Linux is one of the most popular distros for advanced security engineering.

This Debian-based distro comes with an extensive suite of penetration testing tools and applications. Kali’s out-of-the-box operability makes it an easy-to-use distro for newcomers.

The OS enjoys a fair amount of development and community support which paves the way for extensive documentation.

This also covers any guidance you may require for customizations (including ISO customizations) and meta-packages. Kali attracts users with its undercover mode and the Kali NetHunter suite for mobile security testing.

Booting a Live operating system is a nuisance as you have to restart your machine, while installing it to a hard drive means there’s a risk of it being compromised.

Whonix offers an elegant compromise by being designed to work as a virtual machine inside the free program Virtualbox. Whonix is split into two parts. The first ‘Gateway’ routes all connections to the Tor network for the second ‘Workstation’ part.

This hugely reduces the chance of DNS leaks which can be used to monitor what websites you visit. The OS has a number of privacy-conscious features. These include bundled apps such as the Tor Browser and Tox instant messenger.

As it runs in a virtual machine, Whonix is compatible with all operating systems that can run Virtualbox.

Virtual machines can only use a portion of your real system’s resources, so Whonix will not necessarily perform as fast as an OS that has been installed to a local hard drive.

Parrot Security OS is produced by FrozenBox and was released in 2013. It’s a Debian-based Linux distro.

This Linux distro has an in-built portable lab that helps protect your computer from being under attack of security vulnerabilities. This offers a rolling release of updates and frequently added applications.

Some of the core applications included in its desktop environment are Parrot Terminal, OnionShare, MATE, and Tor Browser.

Have you faced trouble in navigating through heavy operating systems earlier? Parrot’s sleek UI and easy navigation make it stand out.

Maybe you are trying to keep your data safe and yet find out any better security distro for your Linux Operating System.

Let your scare fly away. Here you have Discreete Linux OS, called one of the most secure Linux distros to protect your valuable data. This OS doesn’t connect with the internet while working, which separates the Data & cryptographic keys to be protected from the non-trusted network.

Another exciting thing is that this OS is a pure live system, so you don’t need to install it on your computer; instead, you can quickly run it with a USB stick.

Kodachi is a customized Debian-based Linux distro with an XFCE environment that runs seamlessly from a DVD, portable USB stick, and even an SD card.

It comes bundled with pre-installed VPN services and Tor-enabled browsing solutions to improve online privacy and provide a safe browsing experience to the end-users. The distro packs DNSCrypt for masking the TCP/IP protocol configurations so that all online activities are filtered through privacy filters.

Besides, users can encrypt their file directories, emails, and IMs with high-grade cryptographic tools available within the distro. Kodachi’s live sessions are impossible to detect as the OS cleans its traces from the host system.

Your desktop activities remain private, and the distro’s accessibility to your system data is never without authorization.

Septor is produced by the Serbian Linux project, which also produces a general purpose Linux distro for Serbian language speakers.

Based on Debian’s Testing branch, Septor uses the KDE desktop environment and is one of the newest distros in this guide that’s only had a handful of releases. To earn its privacy credentials the distro routes all Internet-bound traffic through the Tor anonymous network.

Earlier, the distro used a launcher script to fetch the latest Tor release from the Internet, but now bundles it by default. In addition to the Tor browser, the distro also includes a couple of tools that are designed for use over the Tor network.

There’s the anonymous file-sharing program called OnionShare and the Ricochet instant messaging client. Besides the Tor tools, the distro also has a few other privacy and security enhancing programs such as the Sweeper utility to clear the cache and temporary files, VeraCrypt encryption software and the Metadata Anonymisation Toolkit (MAT).

It can be directly run from RAM. Presently, Alpine Linux is around only 4MB. This tiny size makes Alpine a top choice. Alpine Linux is for those power users who need a simple, secure, and resource-efficient distribution.

At the moment, Alpine 3.14.1 is the latest version released. Alpine Linux is made with musl, Busybox, apk tools, and toolchain. Alpine is a developers’ favorite specifically for building a Docker Image. This Linux distribution has a low attack surface and is highly cost-effective.

Here the binaries are compiled as PIE or Position Independent Executable including stack smashing protection. This helps prevent the exploitation of all zero-day classes and other such vulnerabilities.

This OS is significantly smaller than the other OS out there and pretty easier to manage. Heads use only free software that means this OS gives more value to users’ freedom and community. Like the other OS above, Heads also uses Tor so that you can be anonymized while surfing online.

All of your traffics are forced to go through Tor by default, but they give the option to make it stop if you want. Heads always give priority to their users.

Qubes OS is a Fedora-based Linux distro, which runs a Xen-based virtualized environment so that you can run your apps and connected devices as isolated components. Its compartmentalization features are helpful for server-side network stack and firewall management, along with security-oriented desktop computing. Additionally, Whonix integration with Qubes permits system-wide Tor availability for users.

Qubes OS facilitates the use of Split GPGs to enhance safety, allowing users to save their private keys safely.

As an added step, the distro strengthens its encryption capabilities by use of device isolation and U2F proxy setup, making it an instant hit with privacy-conscious users.

Tails (which stands for ‘The Amnesiac Incognito Live System’) is probably the most well-known privacy-focused distro.

It can be run from a DVD in Live mode whereby it loads entirely into your system RAM and will leave no trace of its activity.

The OS can also be used in ‘persistent’ mode where your settings can be stored on an encrypted USB stick. All connections are routed through the anonymity network Tor, which conceals your location.

The applications in Tails have also been carefully selected to enhance your privacy – for example, there’s the KeePassX password manager and Paperkey, a command line tool used to export OpenPGP secret keys to print on paper.

There are also a small number of productivity apps such as Mozilla Thunderbird and the powerful LibreOffice suite. The distro ships with a number of desktop applications such as LibreOffice, GIMP, Pidgin, Inkscape, Audacity and Thunderbird.

You can also utilize the Synaptic Package Manager to flesh out the Gnome-powered distro. Any packages you choose to install aren’t made available at subsequent reboots, unless you configure persistent storage.

Like Tails, the Subgraph Operating system is also a Debian-based operating system that prevents the surveillance and interference by sophisticated adversaries from the Internet.

This OS is designed for everyone. Its GNOME-based desktop environment is incredibly user-friendly. While talking about security & privacy, this security distro prevents the attack through intelligent access control, memory corruption-based exploit prevention with a package of patchset (grsecurity patchset and Pax).

Based on Arch Linux, it boasts a testing suite comprising nearly 3000 tools. Its modular packaging abilities allow you to package test solutions for portable execution on any target system.

What’s noteworthy is that the desktop environment only uses pre-configured window managers, making it an absolute delight to work with. BlackArch is available in Full and Slim versions, depending on how you want to use the distro. It also has a supportive community that makes troubleshooting convenient.

Openwall is a security-enhanced Linux distro-based operating system that is specially designed for servers and Applications.

Openwall provides security by reducing the flaws in its software components with the Openwall patch (Best known as a (non-exec stack patch).

This security distro is good to browse the web, email, chat, and share any files through the internet anonymously.

All of the connections are routed to go through I2P software. Unlike some other distro out there, IprediaOS supports TORRENTS.

This Operating System is competitively fast than Tor even you are going to use it on your older computer, and this OS will work well on that as well.

If you are looking for a user-friendly security distro that will allow you the freedom to modify it.

Then PureOS is that one. PureOS is free software that delivers a security package, including the “Duck Duck Go” search engine. It will protect your privacy by avoiding personal search results as it’s free software, so you can download it without purchasing anything.

You can ask for its source code even you are allowed to modify it as well.

That’s pretty much it! So, there are Best Linux Distros for Privacy-Focused Users.

If you have any other favorite Best Linux Distros for Privacy-Focused Users then don’t forget to share them with us in the comment below. Also, if you liked this article, Share on your favorite Social media platform.