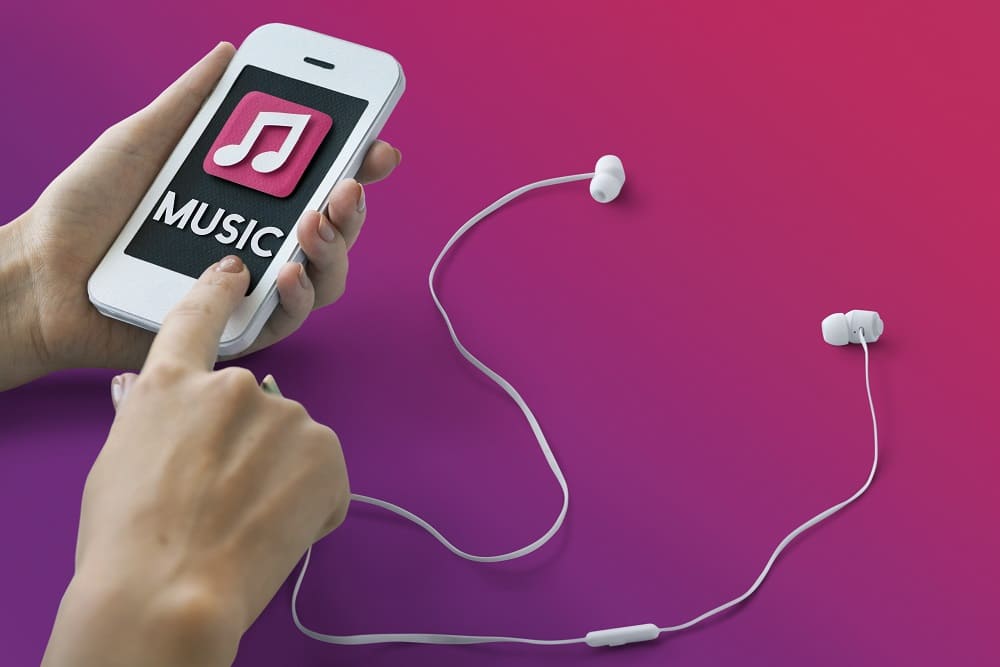 We all love listening to music. Most of us listen to music when using our computers to pass the time, motivate us, or even help us concentrate but what are the best music apps for Ubuntu & Linux Mint?

There are dozens of Linux music payers. You just need to find out the right one for your taste. Even though Ubuntu already comes with the music app to play audio files, however, you can choose to install an additional one for better experience. Here are the 19 Best Music Players for Ubuntu & Linux Mint in 2022.

Rhythmbox is the default music player in Ubuntu, and as such merits a place in this list.

Widely used, Rhythmbox is a reliable, dependable, and extensible GTK music player that uses the Gstreamer backend. The standard layout of the app is straightforward to navigate, and it’s easy to filter through your music using the column browser or the search box.

Not that you have to settle for this look as a variety of Rhythmbox plugins can be added to customise, rearrange and transform the look and feel of the player into something else entirely. Rhythmbox can automatically watch for new music files stored in the ~/Music folder. You can also point the app to look at other sources or folders should you have them.

The app lets you do more than just play, manage and sort music and create playlists. It can scrobble to Last.fm, and it has built-in support for podcasts and internet radio stations.

The player also boasts integration with online music service SoundCloud. For an improved experience on Ubuntu I highly recommend using the rhythmbox-plugin-alternative-toolbar available in the Ubuntu repos as it makes the app look 10x better.

Another application worth mentioning is Sayonara.

The application ships with a cool looking UI with features and functionalities that are more or less what you’d find in Rhythmbox.

You can add files and create playlists, listen to online radio ( SomaFM, and Soundcloud), and make numerous other tweaks such as changing the default theme. Sayonara, however, is stripped of overblown advanced features, and just like Rhythmbox, users are restricted to only a few online streams and listening to music saved on their PC.

Its also based on Gstreamer multimedia platform & can play various media formats, including but not limited to Ogg Vorbis, FLAC. It can import & play audio files from CD/DVDs, Android devices, IPods etc & also supports online music streaming, as well as support for listening podcasts.

You can further customize & enhance its functionality by using various plugins available. Even though its last update came in 2014 but still it’s one of the best music player around.

If your requirement is a simple, snappy, and single interface music player with light system requirements then the Qmmp is the one.

You can consider the Qmmp as a Winamp music player with basic music controls and a minimal interface with the playlist window.

The best part is that like Windows Winamp you can also use a variety of themes to customize the Qmmp look and feel to make it a part of your style. Qmmp music player features XMMS and Winamp 2.x skins support, 10-band equalizer, MMS support, lyrics (using lyrics.wikia.com), cover art, CUE sheet support.

Clementine is a cross-platform music player written in Qt and is particularly popular with people who manage large music collections. This is because the player offers tree view navigation instead of a column or “artwork” browser.

If you’re the sort of person who tend to navigate (and manage) your music from a ‘files and folders‘ POV, you’ll appreciate Clementine’s approach to library management. But there are other reasons to use Clementine, too.

The player hides a ripe amount of advanced options under its (often unwieldy) peel.

Poke around the menus and you’ll find everything from a music equalizer to a built-in format conversion tool, from visualizers to support for WiiMotes, and integration with an (optional) ‘Android app’ remote control app. Music aficionados also get built-support for viewing artist and song info, seeing song lyrics, SoundCloud integration, and… Well, you get the idea!

Exaile is an opensource and cross-platform music player that is written in Python and GTK+.

It comes with a simple interface and is replete with powerful music management functionalities. Exaile enables you to create and organize your playlists, fetch album art, stream online radio stations such as Soma FM and Icecast and so much more.

Tomahawk as music player for modern generation, it provides strong support for online streaming of music .

Tomahawk uses plugins for streaming support, so if you are not into music streaming you can just disable the plugin & listen to music from system directories.

The user interface of this application is modern yet simple & easy to navigate.

DeaDBeeF is billed as the ‘ultimate music player’, and it goes a fair way to matching the claim. It’s generally talked of in terms of being a Linux version of the popular freeware Windows app Foobar2000, but a) I’m not familiar with that player and b) DeaDBeeF (finicky capitalisation aside) more than stands on its own.

It is very much a music player though. It eschews the overblown feature sets you’ll see in other apps and insteads favours a stripped back focus on just playing music.

The app also ships without any major dependencies on GNOME or KDE, and doesn’t use a common media backend like GStreamer. Think of it as the Punk Goes Acoustic to other player’s full studio version.

Written in Python, Quod Libet is a GTK-based music player that uses the Mutagen tagging library.

It comes with a clean and simple UI, completely stripped off any fancy features. The player is plugin-rich and supports tag editing, replay gain, album art, library browsing & internet radio with hundreds of stations to tune into.

It also supports mainstream audio formats such as MP3, MPEG4 AAC, WMA, MOD, and MIDI to mention a few.

VLC player is not only a music player but also supports video playback. Its one the most powerful media player on the planet & provides support for almost all the audio & video formats.

It is not only available for Linux but also for Windows & MAC systems as well.
Though its interface might seem a little out-dated & dull but its features surely made up for that, moreover you can always use themes to make VLC look more beautiful.

Simple and modern-looking Music player developed by the Deepin team.

The Deepin music player also known as DMusic is the default music player of the one the beautiful looking Ubuntu-based operating system known as Deepin. It is developed by Chinese developers.

It has a simple interface with a list of all music and a few controls at the bottom along with an option to see the lyrics of the song.

Naturally, as one of the biggest music streaming services in the world (and one which I know a great many of you use daily) we couldn’t not give a spot to Spotify. A little known fact is that, while yes it’s a big a memory hungry, is Spotify can also play your local media files.

It’s not the most perfect feature as — big, big warning so please take notice — it can totally screw up your track metadata without so much as a prompt or a whistle.

But, even for free account users, you get access to a much bigger array of music than that you (likely) have locally.

Plus the Linux app is decent enough, integrates well into the Ubuntu desktop (yep, sound menu support is present) and so on.

Museeks is another cross-platform simple and clean audio player that is lean on advanced features but still provides the simplicity in playing your music and creating playlists. You can still perform simple tasks like changing the theme to dark theme, repeating, and shuffling music.

This is by far the simplest of all the audio players in terms of features and functionality.

This music player will appeal to every Linux user who loves CLI(Command Line Interface).

CMUS is a music player that is based on command line interface & is undoubtedly the best CLI music player out there. & since it uses CLI, it is very light in memory use (around 4-6 mb in our case) & makes a good choice for Low-end systems.

It is pretty simple to use & you can control it via commands entered through keyboard.

It supports all the audio formats you can throw at it & also boasts a series of good features like play queue, gapless music, playlists filter & also supports music streaming.

Lollypop music player is a GNOME-based player with a modern interface like iTunes.

It is also a free and open-source music player with a very interactive interface. Lollypop is based on Python/GTK+.

It supports a variety of music file formats and also one can browse them by album cover, artists, and music genre. Lollypop features metadata support to automatically fetch the lyrics, artist bio, and cover art; ability to sync with Android via MTP; support Last.fm and TuneIn radio services, Audio scrobbling, and Music streaming.

It also has the party mode which automatically starts playing the party-related playlist; HiDPI display support.

Audacious music player is part way between DeaDBeeF and Rhythmox, merging the ‘lightweight’ ethic of the former with the more management-orientated focus of the latter. It’s a player well worth poking around in, too as a number of included plugins allow you to enable additional features such as lyric fetching, equalizer, and so on.

Strawberry is an open-source music player for enjoying large collections of music, that supports almost all common audio formats.

This application comes with more advanced features like metadata tag editing, fetch album art and song lyric, audio analyzer, and equalizer, transfer music to devices, streaming support and more. Strawberry is a fork of most popular Clementine player which was based on Qt4.

Strawberry was developed in C++ using a more modern Qt5 toolkit for its graphical interface.

Just like CMUS, MOC is another lightweight and terminal-based music player.

Surprisingly, it’s quite efficient with features including key mapping, a mixer, internet streams, and the ability to create playlists and search for music in the directories.

Additionally, it supports output types such as JACK, ALSA, and OSS.

The above-given Clementine music player for Ubuntu Linux is inspired by this beautiful-looking KDE’s default music player called Amarok. It is also open source and free to use.

The Amarok was started losing its popularity for some time but with recent updates, the developers have fixed lots of bugs and again present it as a strong contender in the world of open-source music players. It has a nice interface with different color skin options to set the mood of the user.

If you are looking for an Ubuntu music player then this one can be your because of its capabilities of supporting tons of audio formats, ability to search for lyrics and artists via integrated Wikipedia search, you can run in on Linux, Mac OS X, and Windows; built-in equalizer and a large set of plugins.

That’s pretty much it! So, there are Best Music Players for Ubuntu & Linux Mint.

If you have any other favorite Best Music Players for Ubuntu & Linux Mint then don’t forget to share them with us in the comment below. Also, if you liked this article, Share on your favorite Social media platform.