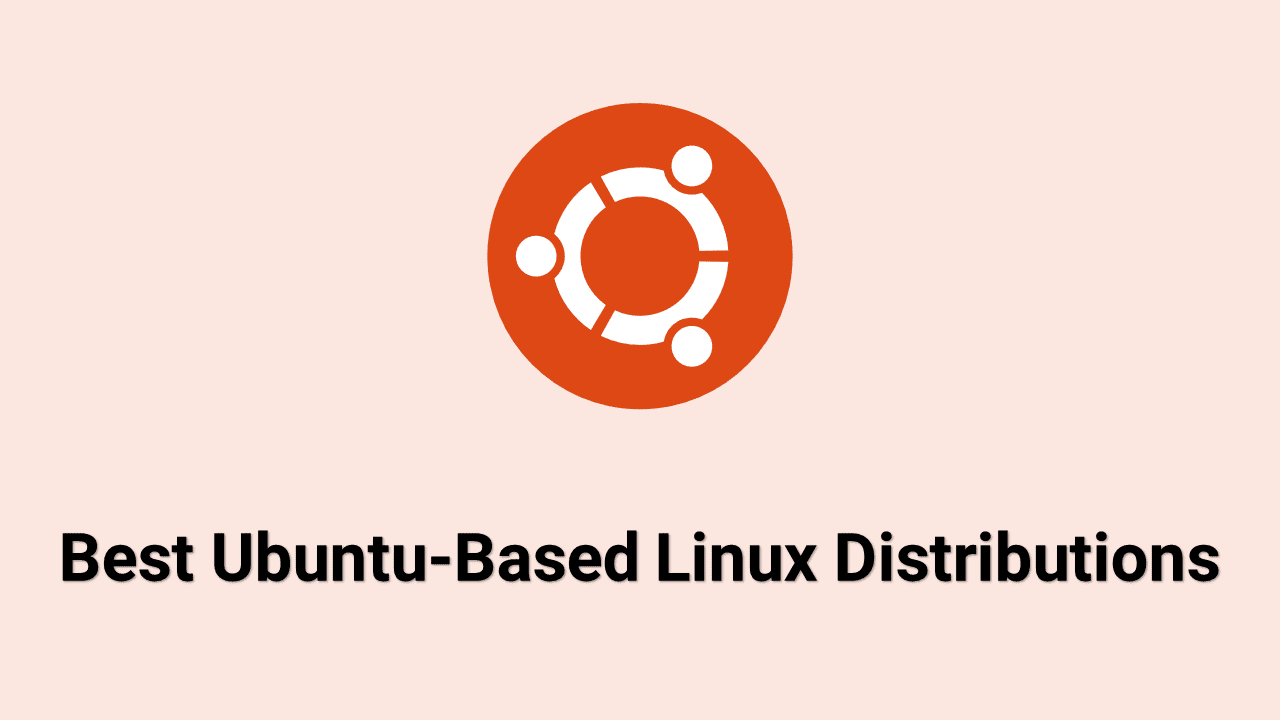 Like Debian and Arch, Ubuntu also acts as a foundation for a multitude of Linux distros, all of them focusing heavily on stability and user security. Ubuntu is perhaps one of the most popular and widely-used Linux distribution owing to its classic UI, stability, user-friendliness, and a rich repository that contains over 50,000+ software packages.

Ubuntu, the Debian-based Linux OS, has been around since 2004. Ever since, it has Produced some excellent distributions that are, in turn, based on Ubuntu’s source code. In addition, Ubuntu is supported by a vast community of dedicated opensource developers who actively maintain contribute to its development to deliver up-to-date software packages, updates, and bug-fixes.

Furthermore, Ubuntu is highly recommended for beginners who are trying to give a shot at Linux. There are numerous flavors based on Ubuntu, and a common misconception is that they are all the same. While they may be based on Ubuntu, each flavor ships with its own unique style and variations to make it stand out from the rest. Here’s a list of the 16 Best Ubuntu-Based Linux Distributions for you to try.

LXLE is a speedy and feature-packed Ubuntu distribution that claims to be heavy on functionality but relatively light on resources.

Its UI is easy on the eyes and runs quite smoothly on desktops with outdated graphic hardware. Surprisingly, the distribution comes with many applications without overloading the base machine.

LXLE has a swift booting time, and with its stable performance, the distro is marketed as another suitable open-source alternative for Windows.

Used by millions around the globe, Linux Mint is a massively popular Linux flavor based off of Ubuntu.

It provides a sleek UI with out-of-the-box applications for everyday use such as LibreOffice suite, Firefox, Pidgin, Thunderbird, and multimedia apps such as VLC and Audacious media players. Owing to its simplicity and ease-of-use, Mint is considered ideal for beginners who are making a transition from Windows to Linux.

Those who prefer to steer clear from the default GNOME desktop but still enjoy the stability and the same code base that Ubuntu provides.

Well, Ubuntu Linux flavors are distro based on the original one without much customization except interface and availability of pre-install packages or software to make the flavor lightweight or beginner-friendly.

This means they will have the same Ubuntu OS but with different desktop environments and numbers of packages to target different users.

For example, Lubuntu is the same as the original Ubuntu but with a lightweight interface, so that we can use it on old laptops and PCs as well. Thus, if you don’t like the default Gnome interface of Ubuntu and want to have it with another Desktop interface such as QT, Plasma, Budgie, Kylin, Mate and more then download the Ubuntu flavours.

One more thing, flavored distros run parallel to the official one, which means, as we get the latest version for the original Ubuntu and the same will be available for them as well later or sooner.

Nitrux is a Linux distribution that is entirely based on Ubuntu.

It is powered by the KDE Plasma Desktop 5 environment, and to top it off, Nitrux even includes the NX Desktop and Firewall. Some necessary apps, like the office suite, media player, and Internet browser, come pre-installed out-of-the-box.

The overall end-user experience is very good with this distro, thanks to the easy-to-use UI.

Lubuntu features an app-packed distro, which comes with extensive documentation for users to suss its full scope of features in no time.

Lubuntu comes packed with MPlayer, LightLocker, Firefox, and even word processors and calculators to boot, with more application packages available for easy download and installation. Lubuntu uses LXQT, which gains support from a series of modernistic, light applications to ensure speedy processing and low hardware requirements.

It is highly malleable, as it incorporates a broad scope of hardware configurations, making it another candidate for enabling gaming on Linux desktops. Neon combines the aesthetics of both Windows and macOS and rolls them together for enhanced effects and functionalities.

Nevertheless, Neon’s USP is its primary offering of a portable cloud computer that can work seamlessly on any smart device, ranging from smartphones to TVs.

Its elegant, macOS-inspired UI ranks it for quick navigation and seamless transitions. It packs a ton of resourceful software packages and widgets for boosting productivity without any unnecessary baggage.

Its updated support for Budgie-Nemo integration and 4K desktop resolutions make it a viable Linux distro.

Pop!_OS is a free and open-source Ubuntu-based Linux distribution.

This distro is specially developed for System 76 computers and laptops. This operating system is designed and developed keeping software developers, administrators, and computer science professionals in mind.

Pop!_OS is a modern Linux distro with a clean user interface, which makes it very easy to use. For gaming or multitasking, Pop!_OS could be an ideal distribution, as it supports AMD and NVIDIA GPUs out-of-the-box. GPU support means smoother workflow and faster navigation.

Xubuntu, like some of its counterparts, is another performance-centric Ubuntu-based Linux distribution.

It features an XFCE desktop environment that is highly customizable and the primary inspiration behind the distro’s name. This distro features an excellent selection of software packages available to users out-of-the-box.

Xubuntu continues to be the epitome of community-driven, open-source operating systems, with a stable execution purposed for a wide variety of uses, ranging from document to image processing. The latest version Impish Indri was released in October 2021 and continues to be a stable version, with backend support till June 2022.

Written in C, C++, and Python, Zorin is a fast, and stable Linux distribution that ships with a sleek UI that closely mimics Windows 7.

Zorin is hyped as an ideal alternative to Windows and, upon trying it out, I couldn’t agree more. The bottom panel resembles the traditional taskbar found in Windows with the iconic start menu and pinned application shortcuts.

Like Elementary, it underscores the fact that it respects users’ privacy by not collecting private and sensitive data. One cannot be certain about this claim and you can only take their word for it. Another key highlight is its ability to run impressively well on old PCs – with as little as 1 GHz Intel Dual Core processor, 1 GB of RAM & 10G of hard disk space.

Additionally, you get to enjoy powerful applications such as LibreOffice, Calendar app & slack, and games that work out of the box.

Kylin is a community edition based on Ubuntu Kylin 20.04 LTS. It includes several third-party applications with long term and stable support.

It’s perfect for both server and desktop usage for daily office work and welcomed by the developers to download. The Kylin forums are actively available to provide feedback and also troubleshooting to find solutions. Kylin has a software center similar to Ubuntu software center and is called Ubuntu Kylin Software Center.

It supports both Ubuntu and Ubuntu Kylin Repositories and is especially convenient for quick installation of Chinese characteristic software developed by Ubuntu Kylin team!

The rich user experience is relatively easy to grasp and memorize. It offers a compact set of software packages to reduce post-installation bloating.

However, you can quickly populate the desktop with software and apps from the dedicated software store, AppCenter. elementary provides an easy-to-configure, Ubuntu LTS-based distribution with many customization options.

Its active Stack Exchange support community proves to be a big help for Linux newbies.

Kubuntu is a lightweight Ubuntu variant that ships with KDE Plasma desktop instead of the traditional GNOME environment. The lightweight KDE Plasma is extremely lean and doesn’t gobble up the CPU.

In so doing, it frees up system resources to be used by other processes. The end result is a faster and reliable system that enables you to do so much more. Like Ubuntu, it’s quite easy to install and use. The KDE Plasma provides a sleek & elegant look-and-feel with numerous wallpapers and polished icons.

Aside from the desktop environment, it resembles Ubuntu in almost every other way like shipping with a set of apps for everyday use like office, graphics, email, music, and photography applications. Kubuntu adopts the same versioning system as Ubuntu and the latest release – Kubuntu 20.04 LTS – is based on Ubuntu 20.04 LTS.

An official variant of Ubuntu, Ubuntu Studio is a Linux-based operating system for creative individuals in the areas of audio production, video production, graphics design, photography and desktop publishing.

It makes professional audio accessible on Linux, it uses the JACK sound server and a kernel built with a low-latency patch.

Up until version 20.10 Ubuntu Studio shipped with the Xfce desktop environment, but this was replaced by KDE Plasma in October 2020.

Feren OS is a free and open-source Ubuntu-based operating system.

It is a stable, powerful, and secure Linux distro, ideal for any type of user. The desktop of Feren OS is quite unique in its own way, but at the same time, it is still very easy to use. Feren OS is powered by KDE Plasma Desktop, which makes it one of the most lightweight and responsive Linux distros out there.

This distro ships in with all the necessary apps pre-installed, and if need be, you can install whichever apps you want from its app store.

If you want to revive your old computer using Ubuntu-based Linux distro, then Linux Lite is one of the best available options because of the lightweight and use of Ubuntu LTS (Long term Support) release to offer a solid operating system for your dying PC or laptop hardware.

It uses a customized Xfce desktop environment. Linux Lite comes with a wide range of helpful tools and program packages that are primarily aimed at beginners and those switching. Various popular software packages can be installed quickly and easily via “Lite Software”, and “Lite Tweaks” helps to adapt and optimize the system.

It has “Linux Lite Control Center”, a control center through which almost all system settings can be made, and a system menu that is similar to the start menu of Windows 7.

Therefore, whether your old PC or laptop was on Windows XP or Windows 7, you will still find a familiar interface on Linux Lite. Overall, Linux Lite offers several such practical things which should make life easier for users who don’t have prior Linux experience. Website for Linux Lite ISO.

That’s pretty much it! So, there are Best Ubuntu-Based Linux Distributions.

If you have any other favorite Best Ubuntu-Based Linux Distributions then don’t forget to share them with us in the comment below. Also, if you liked this article, Share on your favorite Social media platform.