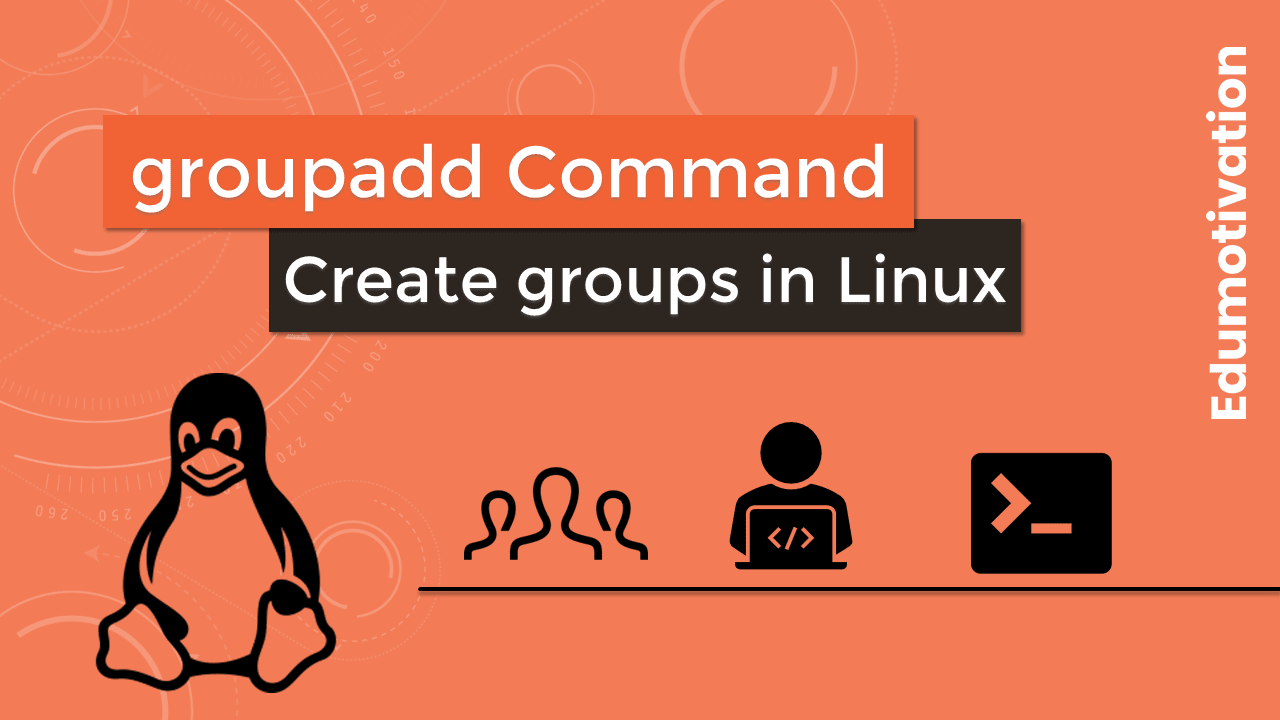 In this guide, you will learn how to create groups in Linux using the groupadd command.

I will explain this topic to you with the help of an example.

Suppose you are a Linux administrator and are managing multiple users.

If some permission or policy is to be enforced for users, we cannot manually apply the permission to each user and this is not the right way to do it.

Therefore groups are used in such situations.

Create a new group and add users to the group to whom you want to apply permissions.

Now you can apply permissions directly to that group and in this way, all members of that group will get that permission.

There are two types of groups in the Linux operating system.

First of all, let’s focus on some of the most important options that we can use with the groupadd.

You must follow the syntax given below to use the groupadd command.

1. How to Create a New Group

To create a new group in Linux you can run the groupadd command.

Note: You have to run the groupadd command as a root user because upon running this command, it makes changes to the following important configuration files whose owner is root.

Here in this example, I am creating a group named group1.

Run the following command to check whether a new group is created.

As soon as the group is successfully created, some entries occur in the /etc/group and /etc/gshadow files, which is very important for any administrator to understand.

Let’s try to understand both these files.

As I told you, each group’s entry resides in the /etc/group and /etc/gshadow files.

A group’s entry in the /etc/group file is something like this.

It contains the four most important pieces of information related to the group and they are separated by a colon(:).

Similarly, the group’s entry in the /etc/gshadow file is something like this.

It contains the four most important pieces of information related to the group and group administrators. Each detail is separated by a colon(:).

To create a system group pass the -r to groupadd command.

Whether you create a system Group or a regular Group for everyone login.defs have a defined ID range.

This means that when we create a new system group, the GID assigned to it will be from this range(100-999).

In this example, I created a system group named dbadmins. Type the following command to check the GID.

As you can see, it is GID 999 assigned to the group which is within the defined range.

3. Create a new Group with a Specific Group ID (GID)

In Linux by default, each group is assigned a unique numeric value called GID(Group Identifier).

login.defs is one of those files from which the groupadd command takes inputs to create new groups.

This is all defined in the /etc/login.defs file.

Have a look at the following details taken from the /etc/login.defs file.

So as soon as we run the groupadd command to create a new group, the next available GID is assigned by taking the reference from login.defs.

So to create a new group with a specific Group ID(GID) pass the -g option to the groupadd command.

Here I am creating a group named group2 with GID 1015.

Type the following command to verify that the GID is set correctly.

4. How to Create a group with a non-unique GID

You can create multiple groups with non-unique GID’s(Duplicate GID’s). To do this you can use the -o option with the groupadd command.

Now I will create a new group named group3 with the same Group ID.

Type the following command to check the result.

As you can see there are two groups with the same Group ID.

There is already a group called dbadmins.

If I create another group with the same name, you will get this error.

This error message can be ignored. to do this pass the -f option to the groupadd command.

Note: This command will not create a new group and can be used only to ignore this error message.

Type the following command to create a new group with an unencrypted password.

In this example, I am creating a group whose name is group4 and password is [email protected].

The group’s password is stored in the /etc/gshadow file.

Caution: This option is not recommended.

7. How to override the default values of /etc/login.defs

As I told you earlier, the login.defs file has maximum and minimum ID ranges of the group.

And when we create a new group, the next available GID is assigned according to login.defs.

But if you want, you can set a custom GID range for the new group.

For example I want to create a group named developers whose GID should be in one of the 2000 to 2005 range.

With the help of the following command we can complete this task.

Type the following command to check the result.

Note: You can use the -K option multiple times in one command.

Use the following commands to access the Manual Page/Help Page of groupadd command.

You can visit at following websites to get more information on groupadd.

I have tried my best to include all the features of groupadd command in this guide.