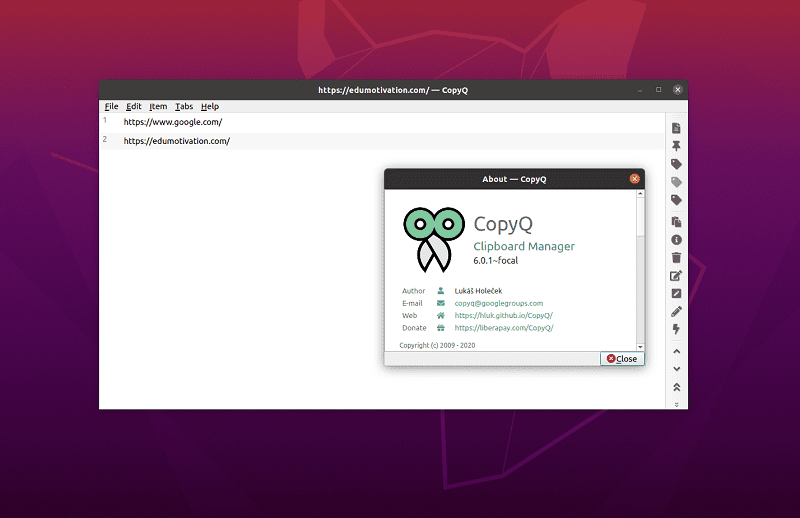 The clipboard is one of computing’s great time-saving tools, but it’s hamstrung in that it only remembers the last item you copied. CopyQ is advanced clipboard manager with editing and scripting features. It monitors system clipboard and saves its content in customized tabs. Saved clipboard can be later copied and pasted directly into any application.

CopyQ stores text, HTML, images or any other custom formats. You can edit, Sort, copy/paste or remove existing clipboard items, add your own from scratch, assign tags to make them more easily identifiable through searches, and organise clips into customisable tabs.

If you want to install the most recent version of CopyQ, you can use the official PPA repository.

First of all open the terminal from system application launcher and type the following command to add the CopyQ PPA to your system.

Then, execute the following commands to install CopyQ package on your Ubuntu system.

CopyQ can be launched from the command line by typing copyq or In the Activities search bar type “CopyQ” and click on the icon.

How to Uninstall CopyQ from Ubuntu 20.04

For some reason, If you want to uninstall CopyQ, refer following procedures.

So type the following command to install the ppa-purge package and uninstall the CopyQ package.

I hope that now you have a good understanding of How to Install CopyQ on Ubuntu 20.04 LTS Focal Fossa.