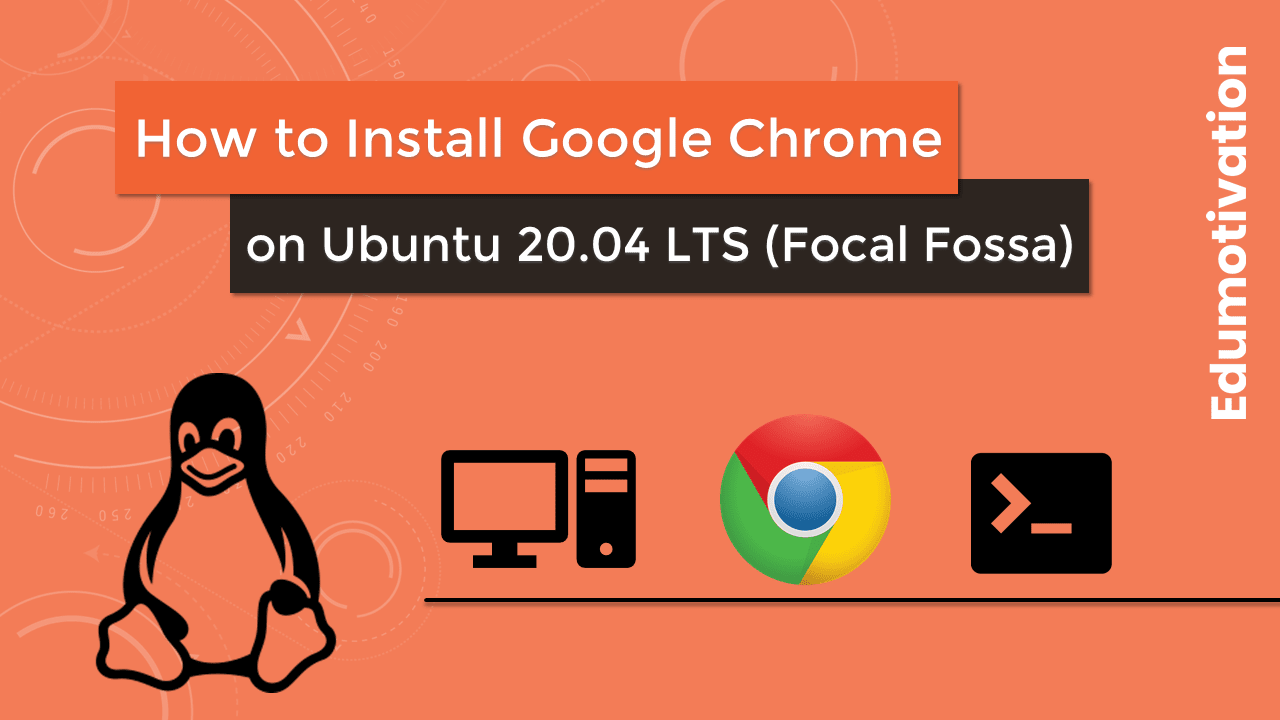 In today’s guide we’re going to learn How to install Google Chrome using terminal on your Ubuntu 20.04.

Everyone Uses Chrome. But Why?

Now I know some of you guys saw the Title of this guide and were like, nah-ah, I use Safari, Microsoft Edge, Opera or Vivaldi and those are all fine choices, but hopefully you know what I mean.

At the beginning of 2021, Google Chrome had nearly 70% of the desktop web browsing market and unlike some other fields where you might only have a couple of choices, like CPU’s, it’s trivial for you to just go and download which ever browser you want.

So why have so many of us gone with Chrome? especially as it’s not even pre-installed on many Desktops.

To answer, we need to first take a look way back to Chrome’s origins.

Back in 2008, When Chrome first hit the scene, Internet Explorer still ruled the world sadly due in large part to its shipping as the default browser for windows systems.

But good old IE was odious for being error prone and subject to frequent crashes.

The open-source alternative Firefox was gaining popularity and while it was mostly more stable than Internet Explorer.

Both browsers suffered from the fact that they’d been around for a while and their underlying architectures were built for a more static internet with more static web pages.

Google realized that the web was heading much more towards sites that behaved like programs in your browser.

Think Google maps or Dropbox and that supporting this kind of content natively would give their browser a huge leg up.

So Chrome was built from the ground up with this kind of content as the focus along with a couple of technical tricks to make it more likely that these fancy web apps would run well.

One is a feature called Sandboxing where each Chrome tab would run its own process.

So, if one tab crashed, it would be more likely that the others would be unaffected.

This contrast with how Internet Explorer ran every window or tab in the same process.

So, an error in one window would often bring down the whole browser as anyone who’s familiar with those old Internet Explorer has stopped working messages should remember well.

While this is also part of the reason Chrome is a notorious memory hug, It did make the browser more stable and Chrome also generally ran faster meaning it was already pretty far ahead from a technical standpoint.

But what really helped this popularity take off was the fact that Chrome’s philosophy was to support open source web standards that were starting to become popular with developers.

In fact, Chrome source code was made open source very early on as part of their Chromium project, which made it easier for developers to understand how the browser works and how to write web apps that would work well with it.

And the combination of Chrome, both being more stable and having better support for a quickly evolving web to mention having the Google brand name behind it and its support for useful browser extensions rather than junky toolbars meant it quickly gained a following.

The browser hit 10% adoption in mid-2010, but by early 2015 it had more desktop users than all the other browsers combined.

As time has gone on, Google has stuck with the philosophy of keeping a streamlined interface that plays well with most web standards while expanding integration with Google’s own services.

Unsurprisingly, this has earned a fair bit of backlash over privacy concerns and Google still hasn’t quite figured out how to keep it from hogging memory.

Although they are working on both these issues, but Chrome’s design continues to keep people from getting angry to the point where they’d switch to another browser similar to what happened to Internet Explorer.

Even Microsoft Edge browser built to succeed IE and compete with Chrome has switched to being a chromium-based program.

So, it doesn’t look like Chrome’s dominance will end anytime soon unless Elon Musk can get a browser called platinum off the ground or something like that.

I don’t know, I mean, the guy can do anything really.

Before installing the Google Chrome package, you must meet certain prerequisites.

So, in order to install Google Chrome on your terminal first of all make sure that you have updated your repository.

You can do so by typing the following command.

After the repository is updated, you need to check whether the wget package is installed because we will download the Google Chrome package using the wget command.

You can type the following command to check if the wget package is installed.

Usually wget is installed in every Linux operating system.

If it is not installed in that case you can issue the following command to install the wget package.

As Google Chrome is not an Open Source software that’s why you cannot find it in Ubuntu Software Center.

Open your terminal and type the following command to download the latest Google Chrome .deb package.

As you can see the latest Google Chrome stable version .deb package has been downloaded.

Now to install Google Chrome using this file (google-chrome-stable_current_amd64.deb) what you need to do is you need to open the terminal.

Note: You must have administrative privileges to install any package in Ubuntu or any other Linux operating system.

So, type the following command to install the Google Chrome package.

When prompted, enter your user password, and the installation will start.

You can type the following command to check if the Google Chrome package is installed.

So as you can see, Google Chrome has been successfully installed.

Now there are two ways you can open the Google Chrome application.

You can open the Google Chrome application graphically through the Activities search bar.

Note: You can simply press the Windows key on your keyboard to open the activities search bar.

You can also open the Google Chrome application by running the following command.

When you start Google Chrome for the first time, a window like the following will appear asking if you want to make Google Chrome your default browser and to send usage statistic and crash reports to Google.

Select according to your preference, and click OK to proceed.

And here is the default Welcome to Google Chrome page.

The good thing about Google Chrome is that it adds an additional repository in your sources.list directory.

You can use the cat command to verify the file contents.

This ensures that your Google Chrome installation will be updated automatically when a new version is released through your desktop standard Software Update tool.

You can type the following command to uninstall/remove the Google Chrome package.

I hope that now you have a good understanding of How to Install Google Chrome Web Browser on Ubuntu 20.04.