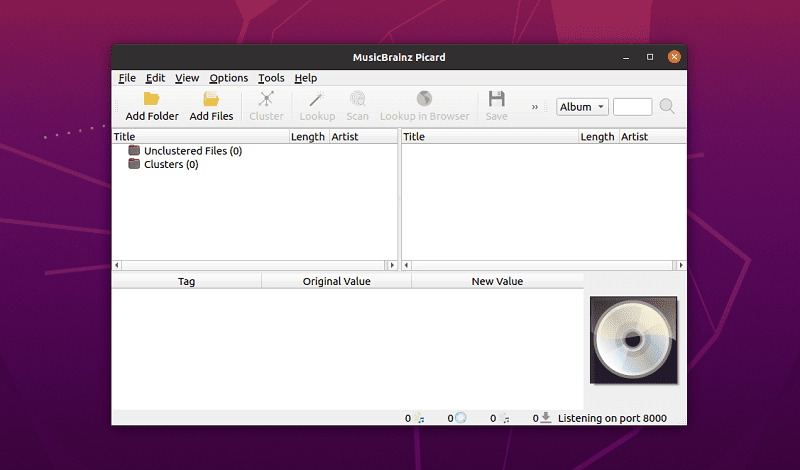 MusicBrainz Picard is not a music player, It’s an open-source music tagger. If you have tons of local music files, Picard allows you to automatically update the music files with correct tracks, album, artist info and album cover art.

It has the ability to identify audio files even without any existing metadata. It allows you to clean your local music by automatically updating artist, album, track information and album art cover for each song. Picard is a cross-platform application available for Microsoft Windows, Linux, macOS and FreeBSD.

MusicBrainz Picard helps you organize your music collection by renaming your music files and sorting them into a directory structure exactly the way you want it. Picard supports a wide range of audio formats including MP3, FLAC, OGG, M4A, WMA, WAV and can also lookup an entire CD for you.

A variety of plugins are available and you can even write your own. A flexible but easy to learn scripting language allows you to exactly specify how your music files will be named and how the tags will look like.

This article explains two methods of installing Picard on Ubuntu 20.04.

The easiest way to install MusicBrainz Picard on Ubuntu 20.04 is by using the snap packaging system.

This is actually the Snap version of the Picard. It can be used on any Linux distribution that has Snap support.

Open your terminal (Ctrl+Alt+T) and type the following command to install the Picard package.

At this step, you have successfully installed Picard on Ubuntu 20.04 system.

If you are not comfortable with the command line, open Ubuntu Software, search for “Picard” and install the application.

If you want to install the most recent version of MusicBrainz Picard, you can use the PPA repository.

First of all open the terminal from system application launcher and type the following command to add the Picard PPA to your system.

Then, execute the following commands to install MusicBrainz Picard package on your Ubuntu system.

Picard can be launched from the command line by typing picard or In the Activities search bar type “Picard” and click on the icon.

How to Uninstall Picard from Ubuntu 20.04

For some reason, If you want to uninstall Picard, refer following methods.

If you have installed Picard via Snap type the following command:

If you have installed the application through PPA then uninstall it by following one of the below procedures.

So type the following command to install the ppa-purge package and uninstall the MusicBrainz Picard package.

I hope that now you have a good understanding of How to install MusicBrainz Picard on Ubuntu 20.04 LTS Focal Fossa.