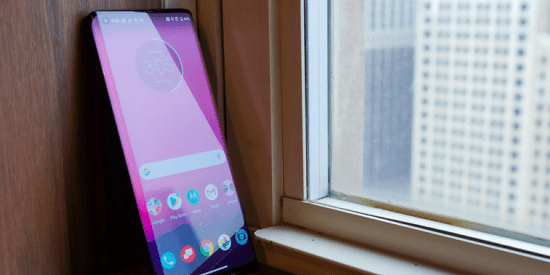 The Motorola Edge 20 Pro is expected to debut on August 5. Here’s what we know about the phone so far.

Motorola is getting ready to unveil a fresh batch of phones on August 5, namely the Motorola Edge 20 and Edge 20 Pro. A new leak from tipster Evan Blass now shows us the latter in all its glory.

The Motorola Edge 20 Pro, unlike the previously leaked standard Edge 20 with a flat panel, was expected to get curved edges like last year’s Edge and Edge Plus.

Those curved sides allowed users to access shortcuts and lit up for calls, alarms, notifications, and charging. Unfortunately, the new Edge 20 Pro also appears to have a flat display in the leaked renders.

So the Edge functionality that gave the series its name will most likely be missing from the new crop. Then again, we’ve seen Motorola drop the curved display even on the Motorola Edge S that launched earlier this year with a flat 90Hz panel.

Apart from its flattened display, the Motorola Edge 20 Pro (previously thought to be named Edge 20 Plus) features a triple camera stack at the back. The primary shooter is depicted as a 108MP camera in the renders. Rumors suggest that a 16MP ultra-wide sensor and an 8MP telephoto camera with 5x optical zoom will complete the setup.

The renders don’t really show a physical fingerprint sensor, so the phone is likely a candidate for an in-display fingerprint sensor. There’s a punch hole camera up top which is believed to be a 32MP selfie shooter.

Like the Motorola Edge S, the Edge 20 Pro is expected to be a mid-ranger powered by the Snapdragon 870 chipset.

The SoC is slightly faster than the flagship Snapdragon 865 Plus from last year and features 5G connectivity, so it should be pretty powerful.

Blass has also posted a wallpaper of the Edge 20 Pro alongside the render. If you fancy it, you can save a copy from the image above.