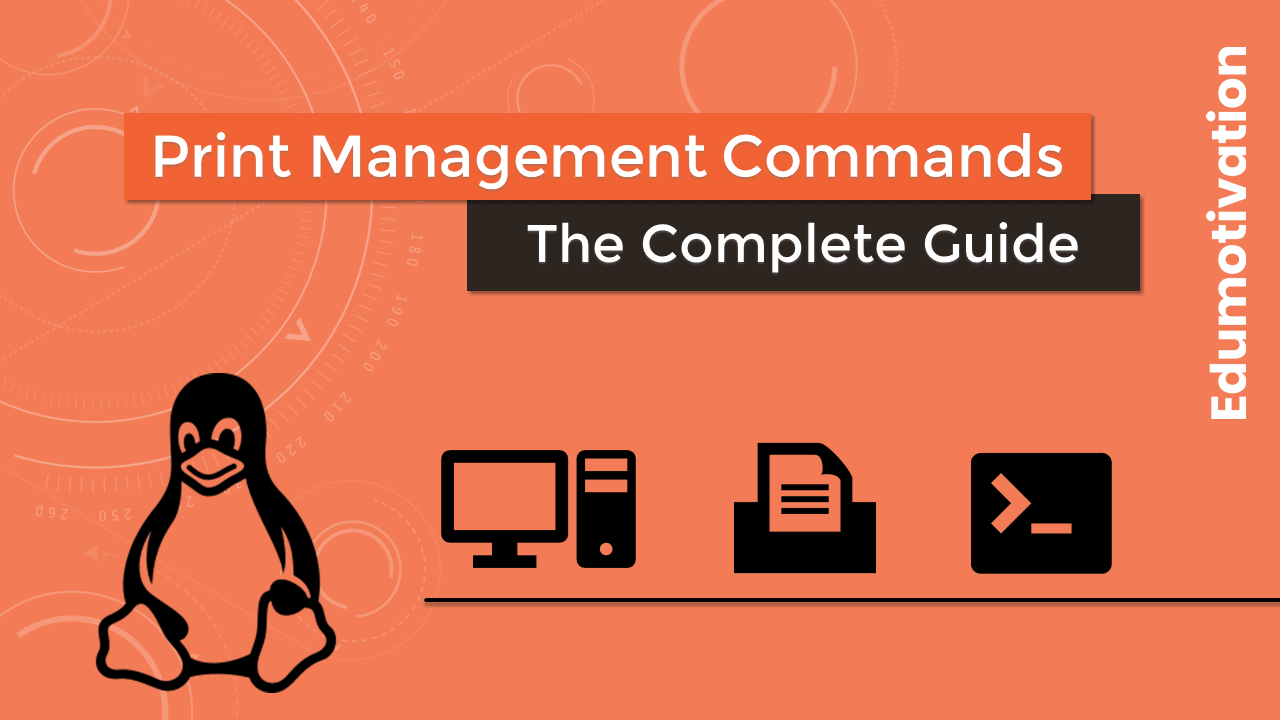 This lesson we’re going to talk about How you can manage CUPS printers from the command line.

Now as you know you can use the CUPS web-based administration utility to manage the CUPS service running on a Linux system.

However, you can also use a variety of different command-line tools to manage CUPS as well.

In this lesson we’re going to review what these command-line tools are.

So, let’s begin by discussing How you can send a print job to a CUPS printer directly from the command line.

You can send a print job to a CUPS printer using the lp command at the command line.

Send a print job to a CUPS printer

The lp command can send a particular file to your CUPS printer, the syntax is doing this as shown here.

An example is shown here where we send a file named projectschedule.txt to a printer named HPLJ5 using the lp command.

Now notice that when we do this the print job is created and it’s assigned an ID number, in this case it’s HPLJ5-2.

Now the lp utility can use some other options besides the -d option.

Set the number of copies to Print

We can also use the -n option with the command to specify how many copies of the print job we want to print.

I want to Print 5 copies for which I can run the following command.

Send an email when the job is completed

We can use the -m option to specify that lp send a confirmation email message to the user that sent the print job when the print job is finished printing.

You can use the -q option followed by number to set the priority of the print job.

For example, I want to give first priority to this print for which I have to run the following command.

Print in Landscape format instead of Portrait

You can use the -o landscape option to specify that the file be printed in Landscape format instead of Portrait format.

Print on both sides of the paper

And if your printer supports duplex printing you can use the -o sides=2 option to specify that we print on both sides of the paper.

In addition to the lp command you can also use another utility called lpstat at the command line.

The lpstat utility is used to display CUPS printer information and probably one of the most useful options you can use the lpstat -t.

This will cause lpstat to display all information about all cups printers on the system.

The example shown here, I ran lpstat and we see that I have just one printer configured on the system his name is HPLJ5.

And you can see that it’s connected with a Parallel Port connection, we can also see how long it’s been up it tells us it’s been accepting requests since Thu 20 2021 03:55:13 AM IST.

We also see what its status is, we see that it’s currently idle meaning that it’s not actually processing any print jobs and we also see that it is online and waiting it’s available to take print jobs.

In addition, if this printer were not idle but we were actively processing print jobs, A list of all the pending print jobs in the queue would also be listed in the output of the lpstat command.

Now if you have a print job pending that print job is in the print queue and you realize that you do not want that job to actually print you can use the cancel command to kill that print job.

Now in order to do this you first have to have the print jobs job ID number and you could use the lpstat command to find out what that job ID number is.

Once you know it you just enter cancel and in this case, we’re cancelling the HPLJ5-4 print job.

When I do it kills the job, it stops it from printing and removes the the print job file from the print queue.

Now if I have more than one CUPS printer defined then I can use the lpoptions command to specify which printer is going to be the default printer for my system.

And this is done using the -d option followed by the name of the printer that you want to be the default printer.

For example, if I want to set the HPLJ5 printer as my default printer I would enter the following command.

This will set the default printer for all users on the same system.

Now be aware that individual users can override this default printer setting however to do this they create a hidden file in their home directory named .lpoptions.

Remember that the dot(.) at the beginning of file name indicates that this is a hidden file and then within that file they add directive default SPACE(Press Space Bar on Keyboard) and then the name of the printer that they want to be their default printer.

Here is an example.

For example, let’s say I had two printers connected to the system one is HPLJ5 and the others HPLJ2.

By creating this file in my home directory and putting this text in there then my default printer will always be HPLJ2 no matter what the system administrator entered with the lpoptions command.

In addition, you can also use the lpoptions command to view your printers configuration settings.

To do this you use the -l option with the lpoptions command.

How to enable or disable the print queue

Now in addition to the lpoptions command there are other commands that you can use to either enable or disable a printers print queue.

In this example, I use the cupsreject HPLJ5 command to disable the HPLJ5 printers print queue.

If we look at the output of the lpstat command beneath it we see that HPLJ5 is not accepting request and tells us when basically the cupsreject command was run it tells us that it’s rejecting jobs.

Even though it will continue processing any queued print jobs the CUPS daemon will not allow any new jobs to enter the queue.

Now if you want you could use the -hold parameter with the cupsreject command.

This will tell the printer to stop printing after the current job is complete instead of going through every single job in the print queue.

When I’m done working on the printer, I can re-enable it by entering cupsaccept followed by the name of the printer at the shell prompt and you’ll start processing the queue again.

So basically, cupsaccept and cupsreject enable or disable the print queue itself but not the printer.

How to enable or disable the printer itself

Now we can accomplish this same task from a different perspective using different commands.

For example, if we wanted to disable the printer itself but not the print queue, we would use a different command.

We use the cupsdisable command instead of the cupsreject command, the syntax is the same we enter cupsdisable followed by the name of the printer.

An example of that is shown right here.

Now when I run this command the print queue itself associate with the HPLJ5 printer will continue to accept new jobs but none of them will actually be sent to the physical printer.

They’ll just be queued up waiting for you to do whatever it is you need to do.

You can see this in the output of the lpstat command notice down here it tells us that the status of the printer is paused.

It’s the print queue itself is still accepting requests but the printer is disabled.

None of the jobs being sent to the print queue will actually be printed until you are enabling the printer using the cupsenable command.

You enter cupsenable followed by the name of the printer.

So to enable a printer type the following command.

And you typically use the --release option with the cupsenable command to release all pending jobs in the queue to be printed.

Now most of the lpd commands have a functionality that’s similar to that offered by a CUPS command.

The key thing to remember is that most of these lpd commands still work with the CUPS daemon even though they were designed to work with the lpd daemon.

Send a file to the Printer for Printing

Query the status of the Printer

You can query the status of the printer using the lpc status command.

You can view a list of pending print jobs in the print queue by entering the lpq command.

Delete a pending job from the Print Queue

And you can delete a pending job from the print queue using the lprm command followed by the job number of the print job that you want to get rid of.

Here is an example.

I have tried my best to include all the Print Management Commands.

2 thoughts on “Explaining Print Management Commands in Linux With Examples”