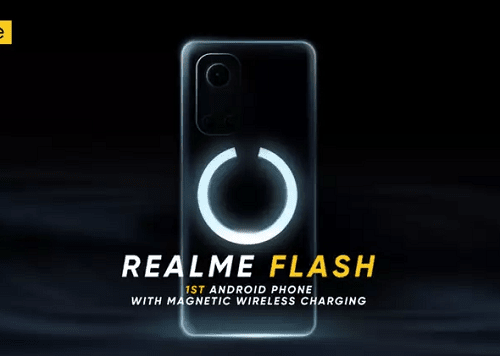 Realme has announced it will launch the first Android phone with magnetic wireless charging technology. This smartphone will be called “Realme Flash”, and it will feature Realme’s MagDart wireless magnetic charger.

This technology may ring a bell as the Apple iPhone 12 series also comes with MagSafe technology for magnetic wireless charging.

Magnetic wireless chargers are convenient as it magnetically sticks to the phone, and you don’t have to worry about placing the phone in the correct position.

According to a report by GSMArena, Realme’s MagDart will be larger than Apple’s MagSafe tech, and it will also include a fan to keep the heat in check. Realme’s MagDart charger is indeed bulky as compared to the MagSafe charger.

It will clip onto the back of the phone for magnetic wireless charging.

As for the phone’s design, it has a punch-hole display with curved edges. The phone has been spotted with three rear cameras.

In terms of specifications, Realme Flash is said to run on the flagship Qualcomm Snapdragon 888 processor paired with 12GB of RAM and 256GB of storage. On the software front, it will run Android 11 with realme UI 2.0 layered on top.

Realme hasn’t shared the launch date for the Realme Flash yet but it’s expected to make it official soon.