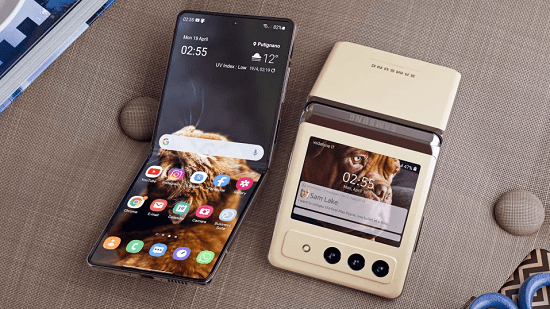 Another day, another load of Samsung leaks pertaining to Samsung’s upcoming foldables. There are a few leaks that we’re covering in a single post. Let’s start with the Water resistance news.

According to a poster leaked by @evleaks, both of Samsung’s foldable phones will feature a water-resistance rating. Along with this, the well-known leaker also offered some specs for the upcoming foldables.

We’ve seen reports of the IPX8 water resistance before, but now we have a visual.

According to the tweet, the Z Flip3 will have a 6.7-inch internal display (same as the Z Flip), and a 1.9-inch external cover display (original Z Flip has a 1.1-inch ext. screen).

Meanwhile, the flip phone will have dual 12MP cameras and a 10MP selfie cam. We might be seeing the same modules as the original Z Flip’s.

There will be two optional S Pens: the Pro and Fold Editions. We can’t wait to hear more about this “Fold Edition” S Pen.

The image in the tweet shows both phones against a waterproof background, and the tweet mentions IPX8 water resistance.

The next leak is proof that Samsung’s next foldable will certainly be compatible with the Z Fold3. Exclusive leaks from 91Mobiles shows a protective case that’s going to be made for the upcoming Samsung Galaxy Z Fold3.

The case has a space to store the S Pen right behind the hinge of the Z Fold3. The case looks as if it holds the S Pen and the compartment flexes whether the phone is in the open or closed positions.

While the case protects the exterior, there’s also a flap that can be flipped over to expose the external display. In addition, the renders don’t show a button on the S Pen itself, so we believe this could be the “Fold Edition” mentioned by the first leak of this post.

The case is made of leather, though it isn’t clear whether it is genuine or vegan. Also, something that hasn’t been made clear is whether the S Pen will be compatible with the cover display and the internal one.

We’d be disappointed to learn that Samsung replaced the Galaxy Note model with a Foldable phone that only has S Pen compatibility on the outside screen.

Finally, a full set of renders of the Samsung Galaxy Z Flip3 has been leaked by WinFuture. This shows the Z Flip3 in black with its larger external cover display.