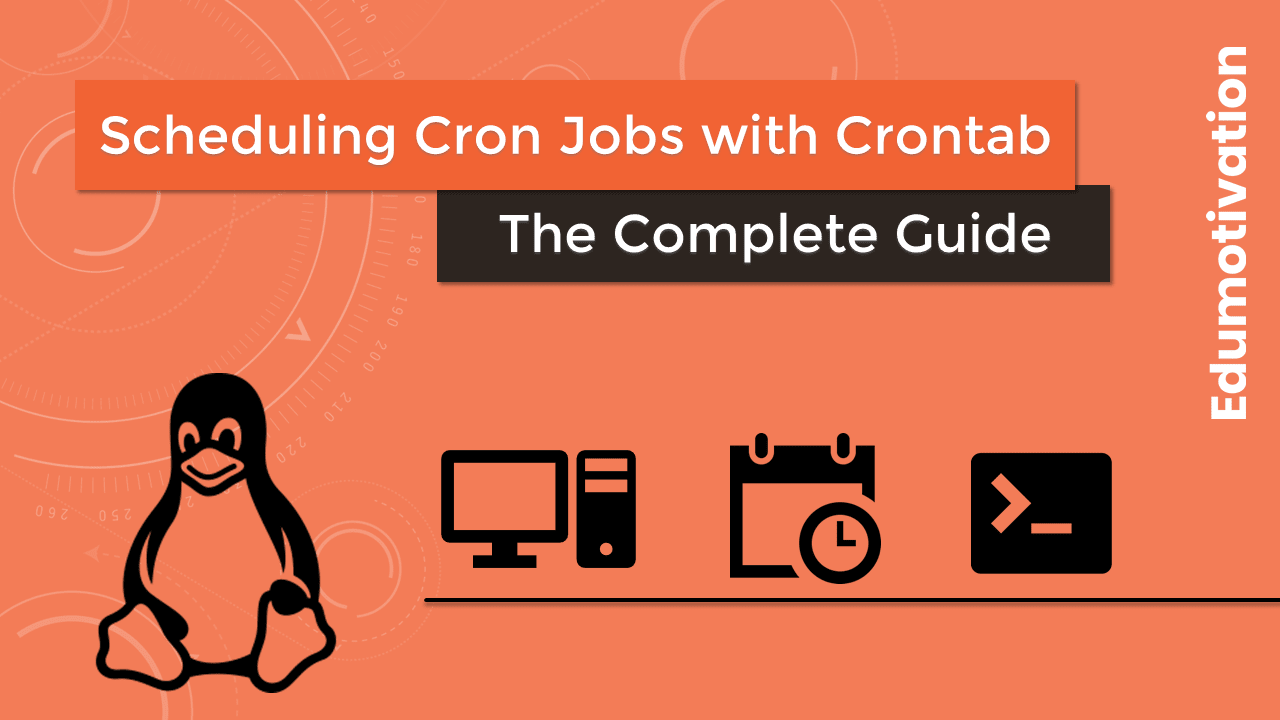 In this lesson we’re going to look at How you can use the cron daemon to schedule jobs to run in the future on a schedule that you specify.

Now as you know, the at daemon can also do the something, you can use it to schedule a job to run at a later time in the future.

However, be aware that the at daemon has one key drawback and that’s the fact that it can only schedule a job to run once in the future.

Now that’s not a problem if you only want the job to run once in the future.

However, there will be many times when you want a job to run in the future on a regular schedule, for example, you may want to run your backup every day at a particular time.

In this situation, the at daemon really doesn’t cut it because you’d have to define new at job every single day to run your backups and that’s really not all that useful.

Instead what we need is a tool that can handle a repetitious schedule and the cron daemon can do just that.

So, in this lesson we’re going to talk about how cron works and then how you can use cron to schedule jobs in the future.

How the cron daemon Works

So, let’s begin by talking about how the cron daemon itself works.

The cron daemon runs when the system is booted up and it runs continuously in the background and it checks special files called crontabs files once every minute to see if there’s a job scheduled that it needs to run.

If there is it runs it, if not it waits and checks again in the next minute.

Now understand that you can configure cron to run two different types of jobs.

You can run System jobs or you can run User jobs.

We’re going to look at both of those.

We’re going to begin, however, by talking about running System jobs.

Now using cron to run System jobs on a schedule is an extremely useful tool for a Linux administrator.

Using cron you can schedule certain jobs to run on a regular schedule and that saves you a ton of time and effort.

The /etc/crontab file specifies what system jobs the cron daemon should run, an example of a crontab file is shown right here.

The /etc/crontab file contains this one command righ there that tells the cron daemon to run scripts that are located in these four directories.

So, any script that’s found in any of these four directories is run automatically by chronological order to the specified schedule.

For example, in the /etc/cron.daily/ directory there are scripts that perform a wide variety of tasks.

For example, we have a script called logrotate, this script contains the commands necessary to rotate your system logs and because it’s in the daily directory it is run once a day.

This is designed to keep your log files from getting too big to keep them manageable and to back them up every so often.

Suggested Read: How do I list files in Linux

So, if you have a system task that you need to be run according to one of these four different schedules Hourly, Daily, Weekly, or Monthly all you have to do is create a script file that has the commands that you need within it and then copy it into the appropriate directory in /etc.

What do you do however, if you have a system job that needs to be run on a schedule, but the schedule required doesn’t fit the four different categories represented by those four cron directories?

Basically, you need it to run on a custom schedule what do you do?

Well in addition to the four directories we just talked about there is a fifth directory in /etc directory called /etc/cron.d/.

If you have a system job and you need it to run on a custom schedule you create what’s called a crontab file in this directory.

This crontab file will be read by the cron daemon and the commands contained within it will be run for you according to the schedule that you specify.

The crontab file is just a text file and it has one cron job per line.

Now each line has 6 different fields and they’re separated by tabs, here’s field1, field2, field3, field 4, field 5 and then the rest is field6.

These different fields configure how the cron job will be scheduled.

For example, let’s suppose that I want to back up the /home directory and I want to do that using the tar command.

I want the backup to occur every day of the week except for Sundays because nobody’s at work on Sunday and I need it to run at 11:05 p.m. later at night when everybody should be gone and not working on the system.

I want to run the tar command, I want it to back up the /home directory and I want to save it to a file named home_bak.tar which will be saved on a removable USB hard disk that has been mounted in /media/usb/.

I can accomplish this using the crontab file shown here.

Let’s take a look at what each of the fields in this crontab file do.

Before that, you look at this chart and some Important Operators, which will make it easier for you to understand.

Now let’s take a look at what each of the fields in this crontab file:

Now notice that we had to use the full path over here to the tar command and that’s different than what you’re used to when running a command at the shell prompt.

Just be aware that the cron daemon does not use the path environment variable to find the command to run.

So, you have to put the full path and if you don’t know what the full path is to the command that you want to run, use the which command at the shell prompt.

Type which followed by the name of the command and it’ll tell you where that command is located.

So using this crontab file my /home directory will be backed up to a file named slash media /media/usb/home_bak.tar at 11:05 am of every day of the month on Monday through Saturday.

Now in addition to creating system cron jobs individual users on your Linux system can also create their own cron jobs running commands on the schedule that they specify and this is done by using a separate crontab file that’s associated with just their user account.

Now unlike the system crontab file which is saved in the /etc directory user crontab files are created and stored in a different directory, they’re stored in /var/spool/cron/.

So if an individual user on your system has created their own crontab file it’ll be saved in the /var/spool/cron/ directory under his or her username.

Users’ crontab files are named according to the user’s name, and their location varies by operating systems.

Now before proceeding I should point out that not all Linux system administrators actually want to allow their users to create their own cron jobs.

Some will have no problem with it whatsoever others will say oh no we don’t allow that.

So, if allowing users to create their own crontab files, their own programs on a particular schedule makes you a bit nervous, you can lock the system down to prevent them from doing this.

The cron daemon will use the two files that you see here:

Both in the /etc directory to determine who can and who cannot create crontab schedules.

Now be aware that by default /etc/cron.allow file does not exist, the only file that exists when the system is initially set up is the /etc/cron.deny file.

Now that’s one way to approach cron security, another approach is to go ahead and create a /etc/cron.allow file in the /etc directory.

If you do this everything changes, basically if /etc/cron.allow exists then /etc/cron.deny is not even used.

How users can create their own Crontab Files

So, with this in mind let’s take a look at how users can create their own crontab files.

In order to do this, they login as themselves, in this example I’m logged in as the helpdesk user and then type the crontab -e command.

When you run crontab -e what it actually does is load the vi editor and it creates a new blank crontab file and loads it in the text editor.

And then within this file the user adds lines for each cron job they want to run, and it uses exactly the same syntax as we saw before for system cron jobs.

So, in this example the tar Command is going to be used to back up my Users home directory to a file called myhome.tar and it will be run every day at 5:10 p.m.

Notice once again we specified the full path to the tar command here.

Now once you’re done creating your crontab file you exit out of the vi editor just as you would if you’re editing any other text file and you save it and when you do a new crontab file for your user accounts created in /var/spool/cron/.

And the cron service will be notified that a new crontab file has been created.

So, it actually reloads itself so the new configuration that you specified in the crontab file can be applied.

Now there are a couple of other options you can use with the crontab command.

And if for some reason you decide you don’t want a crontab file anymore from my user account you use the -r option with crontab which will remove your users crontab file.

Type the following command to remove your current crontab file with a prompt before removal.

1. Schedule the backup script to run every night at 5pm..

2. Schedule the backup script to run at 4am every Friday.

3. Rather than have your special backup script run every Friday, run it on the 20th of every month at 4am.

I hope you have learned something from this article and you may have found that crontab is a very important command in Linux.

I have tried my best to include all the features of crontab command in this guide.