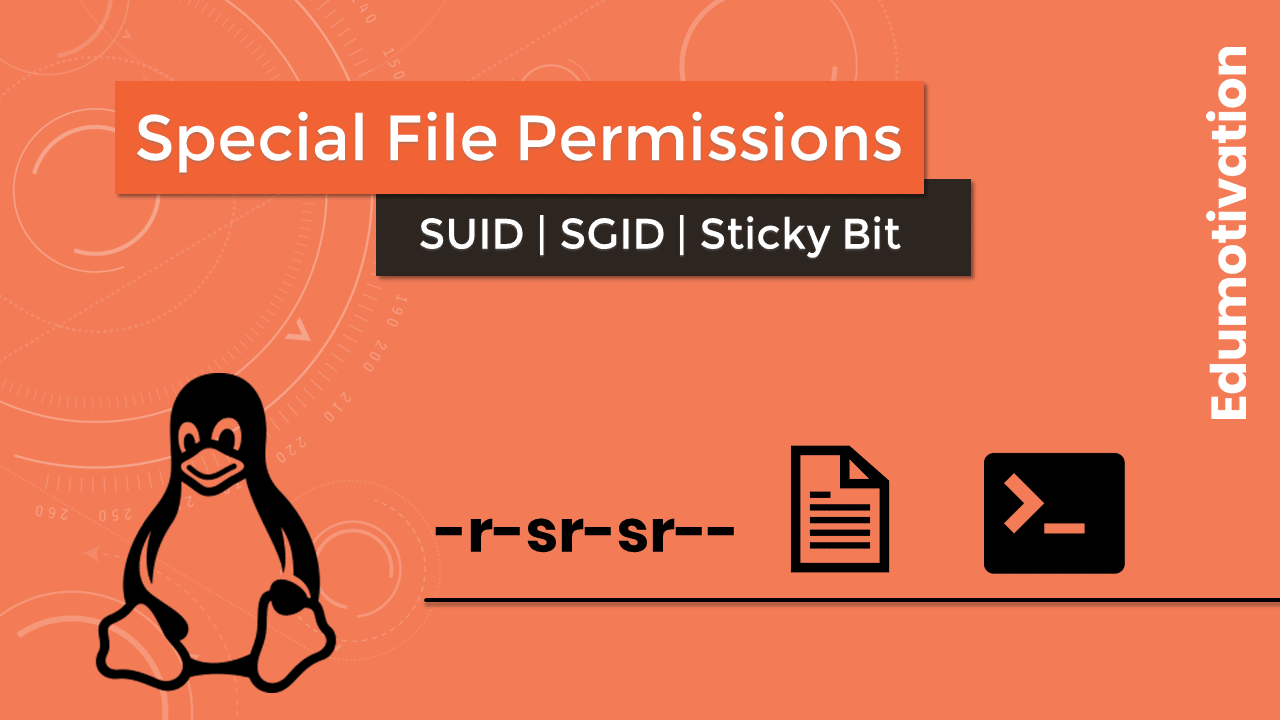 In this lesson we’re going to discuss special file permissions.

In my previous article, I had explained how the Linux Permission works and I would request you to read that guide first.

But be aware that there are other special permissions that are available that you can assign to a file or directory in the Linux file system if you need to.

Now be aware that you probably won’t actually use these permissions very often.

These are designed for very specific purposes and because of that if you use them incorrectly, they could actually represent a grave security risk to your system.

So, make sure you know what you’re doing before you go about setting them.

The first one we want to look at SUID which stands for Set user ID.

Now the Set User ID permission can only be applied to a binary executable file in the file system.

Now if you do assign the Set User ID permission to an executable file and then a user runs that file then the user who ran the file temporarily becomes that files owner.

Now as we said you can’t actually apply this permission to a directory.

There’s another special permission you need to be familiar with the SGID permission which stands for Set Group ID.

Now like the Set User ID permission, the Set Group ID permission is applied to binary executable files or directories in the file system.

If you assign the Set Group ID permission to an executable file and then a user runs that executable file the user who ran the file temporarily becomes a member of the files owning group.

Unlike Set User ID you can assign the set group ID permission to a directory and when you do something special happens.

if a user then creates a file in the directory that has the set group ID permission set then the files owner is set to the users account which is the normal behavior.

The last special permission we want to look at here is Sticky Bit.

When the Sticky Bits permission is assigned to a directory then users can only delete files within the directory for which they are the owner of the file or the parent directory itself.

And this is very important because it basically negates the effect of having the right permission to a directory.

If a user has the write permission to a directory, then that user could potentially delete files in that directory that they don’t actually own.

if you want to prevent that from happening then assign the Sticky Bit permission to that directory.

Now be aware that these special permissions are referenced as an extra digit that gets added to the beginning of the file or directories mode.

Now just like with regular permissions each of these special permissions also has a numeric value assigned to it.

How to set SUID and SGID in Linux

For example let’s suppose we want to add the SUID(Set User ID) and the SGID(Set Group ID) permissions to a file in my home directory.

In addition to setting these permissions I also want my files owner to have read and execute permissions to the file so it gets a value of 5.

So, in this case I would enter the following command at the shell prompt.

Now because I assigned these permissions to script file, the user who ends up running this file will temporarily become the script files owner and likewise because we’ve set the SGID permission on it that user will also become temporarily a member of that files owning group.

Notice in the output of the command we have an s now where we should have an x for both owner and for group.

How to set Sticky Bit in Linux

Let’s look at another example.

Suppose we granted owner and group read, write and execute permissions to a directory named mydata.

But if we do this then having the right permission to the directory allows anyone in the owning group to go ahead and delete any file that they want to in that directory.

We don’t want this to happen so we want to reconfigure the directory so that the users in the owning group can still create files in that directory but we want to block them from deleting files that they don’t actually own to do this.

We assign the Sticky Bit permission to the mydata directory.

Remember Sticky Bit has a value of 1.

We don’t want prying eyes in it so we’re going to actually assign others 0.

And as a result, you’ll notice that the mode now has:

When you see a T as the last digit of the mode it indicates that the Sticky Bit has been set.

Alternatively, You can use Symbolic Notations to assign or remove Special Linux Permissions.

1. Set SUID permission to a file.

2. Remove SUID permission from a file.

3. Set SGID permission to a file.

4. Remove SGID permission from a file.

You can visit at the following website to get more information on Special File Permissions.

I hope that now you have a good understanding of how the Special File Permission works and you have some ideas for how you can use this within your workflow.